On Sunday the organ committee decided which builder to recommend to the vestry. Monday evening Jen took the recommendation to the vestry and it passed. Yesterday as I was practicing organ she dropped by and told me I could let the builder know. I emailed him and as I was making my evening martini, he called me. He seemed very pleased to land our contract even though in the world of pipe organs it has to be a relatively small one (around 600 K).

For the last two days I have spent at least two hours rehearsing the seven minute postlude for this Sunday. 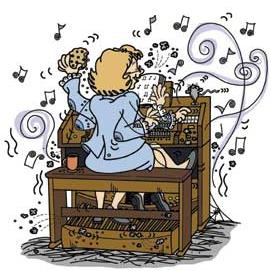 Bach’s St. Anne Fugue ends his masterwork the Clavier-Übung III. This collection of chorales is sometimes called the German Organ Mass. In it Bach set the Lutheran chorale adaptation of many Mass parts, including the Kyrie, the Gloria, the Creed, the Our Father.

He sandwiches them between a huge prelude and fugue. The St. Anne Fugue is the fugue from this collection.

My recent reading is reinforcing my distaste for the performance of a work like this in one concert. It is almost certain that Bach and other composers up through Beethoven never envisioned public performances of their works in their entirety such as ALL of the Clavier-Übung III in one setting or ALL of Beethoven’s sonatas.

I am learning a lot from Kenneth Hamilton (After the Golden Age) about how music was performed before the 20th century. Once again the influence of recordings is pervasive and not necessarily on people’s radar.

Hamilton points out that complete CD sets (not to say record collections) of lengthy works influenced the choice of performers to perform ALL of a set of pieces or at least many of them.

Original composers would have thought about the public performance of their work very differently, expecting movements to be performed separately from a larger work. In the case of piano and other keyboard music, the composer would be surprised if the performer did not extemporize “preludes” before and between excerpts of their work. Interestingly, the function of the prelude was often to get the attention of a group of people in a room, sort of announcing that music was coming.

I lose patience as a listener when the wonderful variety available to any present day concert is reduced to a sort of lengthy pedagogical exercise. My old teacher Craig Cramer used to say if you can’t say what you need to say in forty five minutes or so, something is out of whack.