No coffee this morning because I am fasting for a blood test. Yesterday I chose three Sundays worth of hymns and emailed them to my rector for approval. Did some score prep for today’s rehearsal with “Small Rain.” I am not finding enough time to actually write for these players and it’s a shame because it is an opportunity to compose and then instantly put the work into a rehearsal. I have found this process valuable and fun since I was about 16 years old and had some talented tolerant musician friends in high school.

My college colleagues were not always as interested in my composing as the guys in high school. One college violist snootily told me she couldn’t tell if my unaccompanied viola piece was worth learning. (I don’t think it was probably that great. I still have it somewhere. But what a comment.)

But thankfully there were enough people in my colleges that I often got my work enthusiastically performed.

And that’s where “Small Rain” is also I think.

Right now I’m reviving some old pieces from the 80s just so we can have some original material until I (or someone else in the band) can come up with something fresher.

I also rehearsed organ quite a bit yesterday. I am back to working on William Bolcolm’s setting of “Sometimes I feel like a motherless child.” He has dedicated this piece to the great Motown artist, Marvin Gaye. Marvin Gaye was apparently murdered by his own father. So this irony is probably not lost on Bolcolm as he chose this wonderful African American Spiritual to write a Motown eulogy. I say Motown because to this performer Bolcolm successfully employs an ensemble of Motown sounds on the organ (electric bass idiom in the pedals, rhythmic staccato electric guitar afterbeats in the accompaniment, and tight jazzy complex handfuls of harmony with the melody). All of this is the nasty little key of Eb minor. Nasty to me anyway.

After taking supper up to Eileen (our last supper until the blood fast… we are both having blood drawn this morning for the usual check up tests), for some reason I ended up once again on the organ bench. I guess I have missed practicing organ. Hah. Between vacation and then having it be out of commission while it was repaired, I haven’t bothered with too much organ prep.

Anyway, I played through several settings from Bach’s Orgelbuchlein. 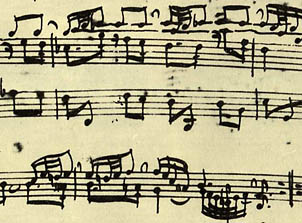 I do love this little work and yesteray it took on a new life for me (this is the way much of this style of music works with my little pea brain… I keep returning to the style of Bach, Mozart, Haydn, Schuber, et al and they keep breathing new life into my understandings of music). I came home and figured out which of the Orgelbuchlein tunes are in the Episcopal Hymnal. (Of the fifty or so settings in this collection that Bach composed and compiled himself, I count 18 hymn texts with 16 tunes in the Hymnal 1982 that Bach set).