I recently picked Eddie Campbell’s The Lovely Horrible Stuff off the graphic novel shelf at the library and took it home to read. Graphic novel is such an unsatisfactory term for these books. This is nonfiction. It’s part memoir and part observation.  Campbell’s wikipedia entry says that he is Scottish now living in Australia. It also describes The Lovely Horrible Stuff as a “graphic novel” which “playfully investigates our relationship with money.”

I have an odd relationship with the concept of money. So I was interested in this book. And indeed it helped me refocus a bit more clearly on the promissory nature of money.

I also liked the way he took photographs and converted them into cartoon. Or just left them barely unaltered.

In addition I enjoyed the occasional idiom I didn’t recognize. While reading, I figured these were Australian idioms, but now I have to figure that the author/illustrator is also Scottish so maybe they haled from there.

Wikipedia also mentions that Campbell is “Probably best known as the illustrator and publisher of From Hell (written by Alan Moore).” This I knew from looking for other titles by him after finishing this book.

I don’t want to give the wrong idea about this little tome. Campbell episodically includes witty chapters on pitching a TV series in Australia and seems obsessed toward the end of the book with the large stone currency of Yap.

Often the huge stones do not move from place to place but simply change ownership. Campbell sees the parallels to the “civilized” approach. He doesn’t take the next step but one ponders the gradual disappearance of money via credit cards and electronic transactions. What’s left is the idea of value. Very cool to see this as a common idea between the Western Civ and a small island in Micronesia.

I am continuing my morning poetry read. Finished Rae Armentrout’s The Money Shot this morning as well. Near the end of the book was a poem that reminded me of The Lovely Horrible Stuff.

Money is talking
to itself again

in this season’s
bondage
and safari look,

Hit the refresh button
and this is what you get,

money pretending
that its hands are tied.

money admonishes,
“Shut up and play.”

This is what more rude customers used to shout when I played in bar once in a great while. It angered the band. I like Armentrout’s use of fresh quirky phrases that have seeped into our daily usage like “hit the refresh button.”

She seems to clearly think about reality and death and what it means to be alive right now in  her situation. She also does it lyrically with few words.

A scatter
of cold cases

For so long
we’ve been practicing—

In heaven
the soul is sheltered

from the expanse
of time.

It contracts
to a point
of light

She describes a preoccupation with novelty as “unwrapping our surprise.”  After all the novelty and what the “discover” that  “rival news hours” are miming, the final line in the poem sums up a frightening conclusion: that the real is what is left, what can’t participate in the usual mindless “escape” of our daily lives.

The Danger of Suppressing the Leaks – NYTimes.com

I also picked up Mark Van Doren’s The History of Knowledge: The Pivotal Events, People, and Achievements of World History. I have read about half of it in the distant past and have now added it to my morning reading. 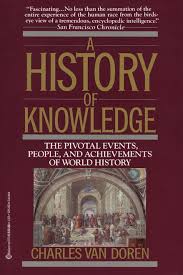 quote from this morning that applies to the way all states hide from their publics information that helps them control them.

Referring to the rise of democracy, Van Doren writes “Now, democratic man, no longer protected by traditional institutions, found himself in danger of being exposed to the absolute tyranny of the state that he himself had created.”

The Surreal Side of Endless Information – NYTimes.com

Disturbing observations about mindless (literally) approaches to marketing and living.

“Time” as in Time magazine. A witty and interesting little report from Maureen Dowd who worked there for a while.

The Liberals Against Affirmative Action – NYTimes.com

Against it when it fails to reflect the inequality of class. Makes sense.

Suicide, With No Warning – NYTimes.com

Another hopeless plea to limit access to means of death.