Owen King writes in his novel, Double Feature, the following passage. It tells what happens when the main character’s father comes to school to share at a “Career Day Presentation.”

“My name is Booth Dolan. I am a storyteller and a thespian. A thespian is an actor. I make believe on a professional basis. I pretend to be people who I am not. You are children. You make believe as a matter of course. I presume that each of you is competent at making believe on at least a semi-professional level. That is as it should be.

Are any of you familiar with the concept of the double feature? No? A double feature is a showing of a two movies back to back. The double feature was the staple of the drive-in movie theater. A single ticket provided you with an entire night’s entertainment. 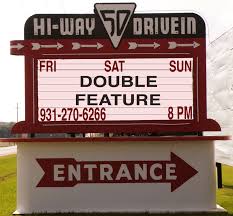 But the second movie of the double feature was always better than the first movie. They saved it for later, when it was good and dark, when the images on the screen could be seen with the greatest clarity. Because that was the one you really wanted to see. The first movie was just the warm-up. The double feature often began while there was still some light, and it could be hard to make out everything happening on the screen—it could be hazy. Everything was perfect for the second movie, though. The second movie had all the exciting stuff: the scares and the surprises and the parts that you’d remember and want to discuss later.

You are currently living in the first movie of the double feature of your life. It’s fine, you’re happy enough, but probably some parts are hazy to you. That’s the nature of the first feature.

However, the characters you play in your minds and in your games now are vital preparation for the wild implausibility of adult existence, which is the second feature. As adults, you will experience incredible adventures. Feats of derring-do will be required. You will labor beneath weighty responsibilities. There will be cunning puzzles to solve. Pirates may fire upon you. You should not be surprised to find yourself traveling by night, with scant provisions, along broken roads haunted by wayfarers of unreliable character. Hangers-on of the court may sow intrigue against you. Misfortune will not be a stranger to you; nor will duplicity. Now will tragedy. There will doubtless be romantic entanglements, as well as many bawdy, humorous episodes.

So. Make believe. It is important. You second feature will start soon.”

Stumbled across an interesting website recently: https://sourcemap.com/ My daughter Elizabeth gave me a kindle book called Rewire: Digital Cosmopolitans in the Age of Connection by Ethan Zuckerman. He mentions this website in a foot note.

Here’s a sample of the maps on sourcemap.

I think this is a “crowd sourced” site (i.e. anyone can put up stuff). But I didn’t look at it very hard.

I received a royalty check in the mail yesterday.

These make my wife (who does our taxes) crazy. Heh.

Finally I was looking up a word this morning and was surprised at how relevant it is to the headlines in my country right now.

If you look at the etymology you can see that the word has been applied historically to politicians.