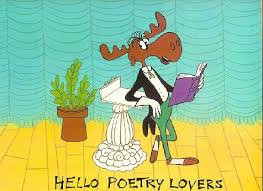 Poem for the day:

A PORTRAIT IN GREYS

by William Carlos Williams
Will it never be possible
to separate you from your greyness?
Must you be always sinking backward
into your grey-brown landscapes—and trees
always in the distance, always against
a grey sky?
Must I be always
moving counter to you? Is there no place
where we can be at peace together
and the motion of our drawing apart
be altogether taken up?
I see myself
standing upon your shoulders touching
a grey, broken sky—
but you, weighted down with me,
yet gripping my ankles,—move
laboriously on,
where it is level and undisturbed by colors.

This feels like a poem written to a parent or an ancestor or at the very least one who has gone before.  Somehow the “I” of the poem, the one who is being held up is the one who is disturbed by colors…. not the “you” of the poem.

Interesting mix of spellings of “grey” and “color.” I usually think of spelling gray “Grey” as evidence of Canadian or British origin (WCW was neither). And of course “colour” instead of color. I’m on page 100 of vol I of WCW’s collected poems and though I have been enjoying reading the poems, this is the first one that jumped out at me.

Oddly enough I found myself strumming Chaikowsky (Tchaikovsky?) on the electric piano this morning. For some reason he fit my mood. Played through his Romance op. 5 and two movements from “The Seasons”  (Oct & Nov).

He is another of those composers who has dogged my musical tastes. I remember quite liking the Andante Cantabile from his first string quartet and playing through a piano transcription of it when I was pretty young. Then in my late teens I was crashing through some underbrush at Interlochen and I heard a student string quartet playing it beautifully. I’ve continued to like this one.

I can hear Chaikowsky’s love of Chopin in the piano music I was playing this morning.  Here’s a lovely recording of the Romance I played through early this morning.

Czeslaw Milosz around the world | TLS

merchandising of a poet

Jed Perl: Why Culture Is Now In Retreat Before The Brute Force Of Money | The New Republic

John Waters on the couch – FT.com

funny quote: “He says it’s good that more people are able to come out of the closet, but adds: “I wish some gay people would go back in. We have enough.”

Are the Arts Irrelevant to the Next Generation? – Miller-McCune

also made the movie, Tommy…

Our Universities: Why Are They Failing? by Anthony Grafton | The New York Review of Books

This is interesting just for the list of books he is using in his essay.

Obama’s Flunking Economy: The Real Cause by Ezra Klein | The New York Review of Books

another one I haven’t read yet

Yay Murakami! It’s just a matter of time before I obtain and read this one.

articles on listening to books and isolation via headphones