On the treadmill this morning, I read the first chapter of Mont-St.-Michel and Chartres by Henry Adams.

I have long admired the fact that Adams wrote his autobiography, The Education of Henry Adams, in the third third person.

At the time I vaguely remembered there was a corollary island with a church on it in France that Adams had written a book about. A quick glance at a map confirmed. Curiously I found no reference to the French St. Michel at the Cornwall St. Michaels, but the French one is the original. 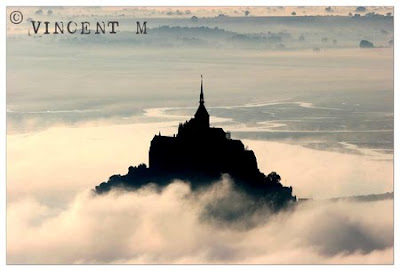 Apparently, the English St. Micheal’s Mount was erected a year after the famous invasion of the Normans. Here is what the wikipedia has to say about this:

In 1067, the monastery of Mont-Saint-Michel gave its support to duke William of Normandy in his claim to the throne of England. It was rewarded with properties and grounds on the English side of the Channel, including a small island located at the west of Cornwall, which, modelled after the Mount, became aNorman priory named St Michael’s Mount of Penzance.

So there you have it. Two very similar places on either side of the English channel: islands that can be walked to on foot when the tide is low and must be approached by boat when the tide is in, both named after Archangel Micheal. Both seem to be French in origin though you would never know it visiting the one in the U.K…… or maybe I just missed that plaque.