At the end of the anniversary edition of American Gods, Neil Gaiman says that he spent a good deal of his life writing Sandman and the reader should get copies and read it. Never one to totally ignore the ideas of a writer I admire, I went to the library yesterday to see what I could find. 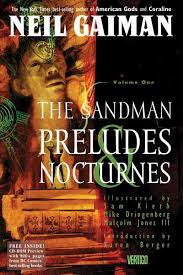 Volume one was the only missing volume so I checked out 2-5.

And an anthology entitle The Sandman: Endless Nights. 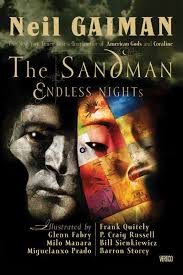 Last night I read Endless Nights. I think the glossy paper puts me off a bit. This is probably my old guy stuff, having read comics, books and graphic novels all printed on lovely rough paper all my life.

But there were some interesting stories and prose-poems in this book.

Gaiman mentions  R. A. Lafferty, a writer,  I have admired over the years in his introduction to Endless Nights 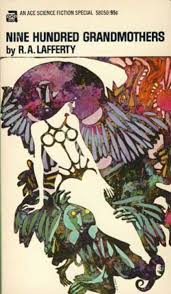 I used to own his Nine Hundred Grandmothers. Gaiman says that Lafferty “wrote like an angel, and, like most things angelic, may not be to everyone’s taste.” I decided I would like to read some Lafferty and went and checked my library.

All I found was his novel, Okla Hannali, a fictionalized historical story about Native Americans. I read the first four chapters last night. 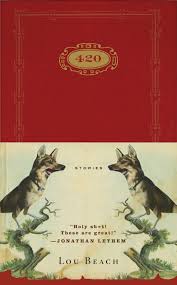 I also finished savoring Lou Beach’s lovely 402 Characters. I plan to try to “like” him or whatever on Facebook where most of these poems or whatever you want to call them supposedly originated. (Post morning additional note: I just found that most if not all of this book is available online with audio portions also linked: http://420characters.com/index.html )

I read this essay this morning. In it, Maier makes several interesting points. He draws a parrallel between the impact of nuclear technology on the 50s and the integrated chip from then to now.

“As of 1963 only 10 percent of electronic components were in integrated circuits; by 1973, 95 percent were. Meanwhile the unit price dropped from $50 to $1, and the military’s portion of consumption fell from 100 percent to about a third.”

He speculates that technology may be changing the very idea of empire in the 21st century. At least it is putting stress on the idea of territorial security as represented by America’s 20th century empire. 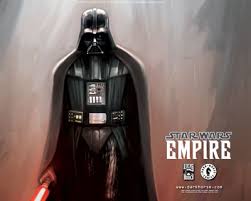 But he is careful in his analysis.

” Still, U.S. supremacy was not based on the continued acquisition or annexation of states. Instead it rested on a trio of hegemonic assets….” 1. “the reach of American power, or “full-spectrum dominance..” 2. “American economic role–first as producer, then diffuser and consumer….” 3. “American cultural attractions and ideologies…”

I found his subsequent analogies of cultural empire pretty interesting:

“The reach of American culture and values had many earlier precedents. The influence of Hellenistic art reached the Indus and beyond; Greek and Latin art, philosophy, and linguistic primacy had penetrated vast areas, and their presence lingered even as the Alexandrian and later Roman borders shrank. Buddhist texts and models of spiritual commitment suffused East Asia… Islam … left a powerful notion of an underlying territorial as well as a spiritual community. the Habsburg conjunction of Roman Catholic religious institutions and imperial power testified to a cultural connection from the backlands of Brazil to the edges of Poland…”

One last point he makes in the essay also captured my attention. He differentiates between the effect and desirability of democracy and capitalism. Sorting out these two is important to me. I support the former much more than the latter.  Then he mentions that if there is to be “an empire of liberty, as Jefferson envisioned, it could not be America’s alone. 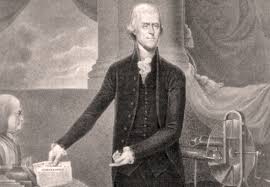 I only have the Afterword left to read. American Empire is an illuminating book. I love the way he pulls thousands of years of history into his discussion.

A study encourages people to take the doctor’s notes home after exams. – NYTimes.com

I would love to see the entire medical profession culture changed toward more openness. I like the idea that (excepting those who are being treated for mental illness) patients should be able to manage their own care with as much info as possible.

Skryabin’s notion of color organ was used in this concert. I would love to have heard/seen it. 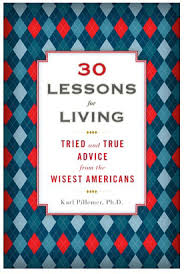 Maybe it’s because I am becoming “old,” but these age/wisdom things attract me. Thank you to daughter Sarah for pointing me to this podcast. I have added Radiolab to my night listening…..

Thank you to daughter Elizabeth (who is on a flight to Beijing as I write this) for pointing out this injustice and linking me up to sign the petition that stopped this woman’s deportation.