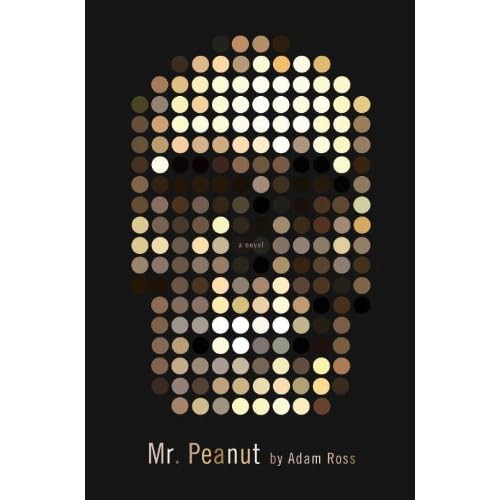 So I finished reading Mr. Peanut yesterday.  My wife is now reading it.

I put the spoiler alert so I don’t have to worry too much about ruining this wonderful book for anyone.

It is a book about marriage and Escher-like puzzles. There are three marriages in the book. David & Alice Peppin, Detective Ward Hastrell & Hannah Hastrell, Detective Sam Sheppard and Marilyn Sheppard.

About half way through the book a shadowy character named Mobius is introduced. At this point if it hasn’t already occurred to the reader, it becomes very apparent that some very odd puzzles are embedded in this story including the consistent reality of the story you are reading. Are you reading a story or a story  about writing a story? These questions are not resolved until the last few pages.

There are dozens of little plot rhymes throughout the book. These begin to resemble a story-telling version of Escher prints.  The wives never meet. Yet they share interesting backgrounds. Alice & Marilyn both are quasi-orphans whose mothers die and whose father reject them.  The two detectives transform from police procedural mystery characters to full blown characters whose lives and marriages push the story forward.

David constantly refers to Escher prints. One of the video games he helps develop and design is based on Escher prints. Escher images are used throughout to describe situations and people in the book. Mobius for Chrissake!

Alice herself is a wonderful portrait in a person struggling with life, sometimes triumphing and sometimes being beaten. Her name is an obvious reference to someone who fell down a hole and whose life is constantly and weirdly shifting around her. She remains a believable intriguing mystery to me as a character.

Also in an Escher-type manner, Alice and Marilyn both blame much of their own pathology on their husband. Both of them tell their husbands that they (the husbands) are “cursed”  exhibiting a weird point of view and using the same terminology. And both husbands (as well as all of the main characters it seems) behave badly at times.

And the novel itself sort of leaks into reality in an Escher manner when you realize that the Sam Sheppard character is based on a real life person. Albeit one who is so distorted by TV and Movie references that this reader didn’t even bother to wonder how much of the character is based on reality. It just doesn’t matter. Ross does deal gamely with the question of who actually kills Sheppards wife in this story. I won’t spoil that by telling you how this turns out. You’ll have to read it for yourself.

This book doesn’t come out until June. I read an advance copy I found on the shelf at the library. Ross himself has an interesting interview at the Amazon site. [link]

He confesses that Alice’s weird death (one of them anyway) via eating peanuts for which she has a deadly allergy was a family incident that sparked his initial idea for this book over thirteen years ago.

He says the book is about marriage:

“I like to say that Mr. Peanut is the story of three marriages that tell the story of one marriage–that is, the detectives’ marriages, Sam Sheppard’s and Ward Hastroll’s, telling the story of David and Alice’s and vice versa. Either way, like the Escher drawings that inspire the video games David designs for a living, they’re supposed to interlock to form another pattern, to be dynamic in their interaction. As the novel progresses, the reader should feel a more intense oscillation between the parts and the whole.”

There are intense descriptions of real life scenes in this book. A bloody miscarriage on an air flight. The fetus dubbed Mr Peanut.

Sheppard has an odd relationship with children. He seems to see his wife and child as an encumbrance to his career and sex life. He has difficulty remember at one point spending much time with his son as a child. But then later there is a moving description of how Sheppard himself is allowed to assist in the birth of his son.

Ross gets a lot of this kind of life stuff just right. He has a wicked and touching insight into how people and marriages actually are.

There is much more to be said about this well-written layered book. But I stop here in the hopes that you will somehow obtain a copy in June and read it for yourself. Good stuff.