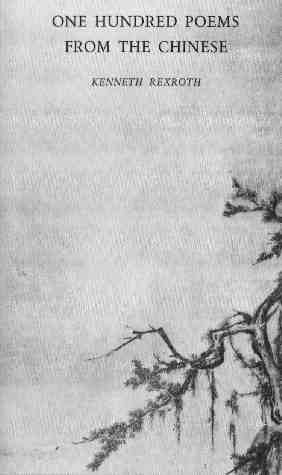 After filling and starting the dang dishwasher this morning, I took my first cup of coffee outside to stand on the steps for a moment and savor the cool damp morning.

It put me in mind of Rexroth’s two slim books of poetry from the Chinese and the Japanese.

I admit to reading more Japanese poetry than Chinese.

I came inside and pulled both of them out of the bookshelf and read a few of the Chinese ones.

Here’s a [link] to a page of them. I suppose the person who lovingly transcribed these is in violation of copyrights. Good grief. They are still beautiful poems and I have a real copy sitting next to my chair at the moment. I recommend these lovely poems.  This web site also has some of the Japanese poems [link] as well as a useful portal to texts of Rexroth (who died in 1982) online [link to list of links]

Besides my melancholy morning mood, I am thinking of the Chinese because I continue to read in the Mao bio. I always vaguely knew that Mao seemed to have ruined China, but I had no idea how many misperceptions about him seem to prevail. At least the authors of this book seem to be correcting some common myths about him and creating a picture of a ruthless Chinese Stalin who began purges of his own people (Communists) well before Stalin began his waves of murder in Russia.

I can see why this book is banned in China (if it is indeed banned). It is meticulously researched and there are extensive footnotes to sources consulted.

Rexroth makes me think of Ezra Pound’s renditions of poets like Rihaku. I have been reading this poetry since my teens. Here’s one of my favorites: