I listen to podcasts. Now I guess I will listen even more since I’m doing a daily twenty minute jog in place. I may eventually use audible.com since I recently discovered that having a Prime Amazon account includes this.  Audible.com always put me off because I was under the impression that you had to subscribe to their service and sort of rent a book or two a month. So instead I have purchased synced readings to some of the Kindle books I own. These turn out to be available on the Amazon Audible app. Who knew?

Anyway, I have a lot to listen to on podcasts so I’m not needing to mess with Audible.com but I probably will eventually.

In the meantime, here are two podcasts that I have listened to and am quite struck by. I have read and enjoyed Jared Diamond’s book, On Guns and Steel. He talks about his new book, Upheaval: Turning Points for Nations in Crisis, on this podcast. 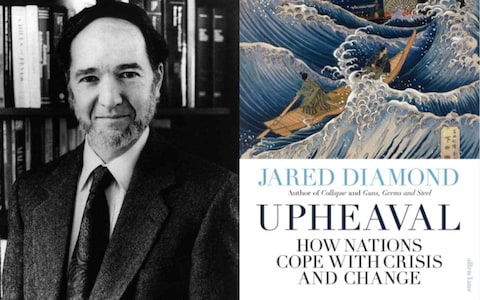 One of the things he says is that he sees the world as being in a neck and neck horse race between the Horse of Destruction and the Horse of Hope. He gives hope a slight edge but points out that both “horses” are speeding up exponentially.

I have been thinking about the proliferation of negativity via social media and other internet exchanges. I suspect that the terrible things happening in the world are continuing to happen at the rate they have in the past. It’s just that negative info is so much more interesting than mundane hopeful info.

But I’m convinced that there are many, many good things that happen quietly all around the world. I have no idea of the proportion between the two extremes, but I know that  many quiet good things happen because of people as well as awful and atrocious things.

It sounds a bit Pollyanna which is annoying but leads me to my next link.

Some of you may recall David Sedaris  hilarious rendition of “Roy Spivey” by Miranda July. It was voted listeners’ favorite podcast in the first ten years of the New Yorker’s Fiction Podcast.  The link above is to another story by July and I think it’s spiffy. I have been interested in veiled complexity lately (as Daniyal Mueenuddin’s marvelous stuff). July is not exactly veiling her complexity as clothing it with an eccentric surface. I’m not going to go further in hopes that a few of you will listen and/or read this excellent story called “The Metal Bowl.”

I put this recent story up on Facebogus. I was in on the concept of street  musicians in Holland from its inception. I finally quit when a police officer told me my Mozart on my electric piano was too loud. Fuck em.

Me and Dr. VanHemert playing on the street 8 years ago.

Finally, I have to share this. Even as I write this, this conference is streaming live on YouTube. This is from yesterday. Jeremy Daum, my son-in-law, is looking good. Eileen and I have it boomarked to check out together sometime. I have to say I am proud of Jeremy!