I woke up this morning thinking strange quiet thoughts. I have often puzzled over how I fit into what family systems people call my “family of origin.” This morning I wondered if I was an “outsider” in an outsider system. Both my father and his father were outsiders of sorts. Both men threw themselves against a church system that was inflexible and largely anti-intellectual. I think of both of them as thinkers in a non-thinker church.

They were not terribly deep thinkers. But still I heard stories of my grand-father in which I could get a whiff of his struggle. He was in the first wave or two of ministers in his denomination (The Church of God) to go to the little church college in Anderson Indiana.

When my grandfather got a pastorate in the south, church members called him “the book-learnin’ preacher” or some such thing.

There are family stories of the way he stood up to bullies and the Ku Klux Klan. I suspect he is idealized in these but there is probably some kernel of truth in his stubborn approach to life from the outside.

My father also became a minister in this denomination. He attended the same college as his Dad in Anderson, Indiana. I was born while he was in undergraduate school there.

His story also involved struggle. He moved from a small Tennessee church ministry to the more urban ministry in Flint Michigan in 1963. The church was about half teachers and half factory workers. Before he was done we had anonymous death threat phone calls about his stands from the pulpit.

He eventually turned away from this denomination. But not before he had suffered some petty little humiliations like being removed from the church state directory of minsters (or something like that… this is all my strange quiet memories this morning… ).

I myself grew up loving poetry, literature, art and music. Neither of my parents loved these things particularly. Mom studied art when she attended the same small denominational church college as my Dad.

Dad’s father and mother gave him a multi-volume collection of poetry on his 24th birthday.

I now have them sitting on my shelves.

They are not particularly well thumbed. The black on the spine reflects a time when my Dad cataloged his books in an obscure system.

You can see the inked-in classification in my Dad’s hand writing: 7-P/A – 23.

I also have been remembering that when I was in my very early teens I bought little books about artists. People like Degas and Rodin. 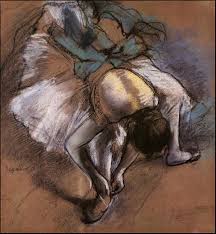 I remember looking and admiring paintings of ballet dancers.

I wrote a song once about a music box ballet dancer. 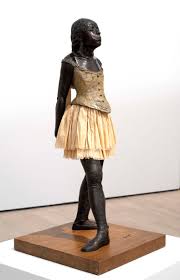 I see the irony as I sit as a 61 year old outsider improvising music for ballet classes. I have fallen into a dream in my youth.