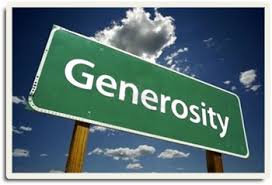 Charles Taylor in his book The Secular Age talks about Descartes.

I’ve always  had a soft spot for Descartes. I was introduced to him in a college logic class and continue to dip into his works from time to time.

Taylor points out the way Descartes uses the word, “generosity,” to mean something much different than the modern sense of this word.

“This word meant something different in the seventeenth century. It designates the lively sense one has of one’s rank, and of the honour which attaches to it, which motivates one to live up to the demands of one’s station… heroes [in stage plays of Descartes time] are always declaring their ‘générositié’ as the reason for the striking, courageous and often gruesome acts they are about to commit.”

I was intrigued and checked it out in the Oxford Dictionary of English. Sure enough, there tons of quotes to illustrate this obsolete mean of the word.

Under the definition “Aristocratic birth or lineage; nobility” was this lovely quote:

“1572 J. Bossewell Wks. Armorie f. 13v, Sentences concerning generositie, collected out of sundrye Aucthors, and firste certayne verses, made by G. Chaucer, teaching what is gentleness, or who is worthy to bee called gentle.”

Another definition moves a bit toward our modern understanding of “generosity.”

You can hear this in the phrase, “generosity of spirit,” which sort of combines the obsolete meaning with the modern. I usually read through the sentences provided to illustrate the meaning of words in the OED. Here’s a great one for generosity.

“2001   Cape Times 25 May ii. 12/3   South Africans lack a generosity of spirit and would much rather actively resent the success of others than be happy that success means one less lumpen pissing on the pavement.”

Yesterday I found myself thinking of the phrase, “duty and delight.”

Some used it at staff. I know it as the title of Erik Routley’s Festschrift. I was wondering where the phrase comes from. I found myself using it talking to my student, Rudy, yesterday. We worked on two measures for about forty minutes. It was quite intense. He understood that passage but was having difficulty executing it. When we moved from that piece to a Scriabin prelude, I refrained from doing much constructive criticism and made him play it three times all the way through. For the third time, I removed all the stuff on his baby grand and opened the lid. I reminded him how much better it sounds now that he had a piano technician work on it.

The last time through I could tell that he was letting himself enjoy it more. That’s when I mentioned “duty and delight.”

Besides Routley’s own hymn quoted in the subtitle of the Festschrift (“In praise of God meet duty and delight”), the editors give two more references for the phrase: an Isaac Watts version of Psalm 147 and the United Reformed Church (of Scotland I guess) Book of Worship second eucharistic prayer.

I have penciled in the margin of my copy of this book that the two words are used in conjunction St. Augustine’s City of God as found in translation and excerpted in Robert Wright’s Readings for the Daily Office from the Early Church, p. 425

“[God] will be the goal of all our longings; and we shall see him for ever; we shall love him without surfeit; we shall praise him without wearying. This will be the duty, the delight, the activity of all, shared by all who share the life of eternity.”