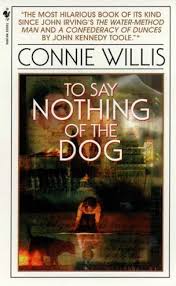 Finished reading To Say Nothing of the Dog by Connie Willis last night. It’s another of her history time travel novels like the famous Doomsday Book which I have also read. 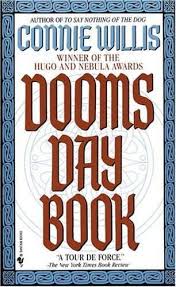 But To Say Nothing of the Dog is more of a comedy of manners in the style of P. G. Wodehouse with a few basic sci-fi twists.

I love her references to some of my favorite fictional characters throughout (Jeeves, of course, 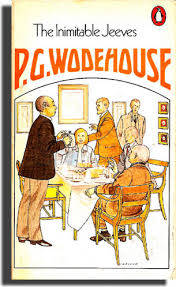 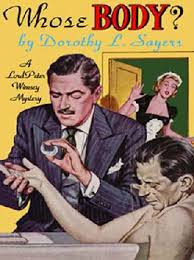 And I also enjoyed the background of Oxford both in the future and in the past.  It was a good read.

It looks like I am re-reading A Failure of Nerve by Friedman for the third or fourth time. 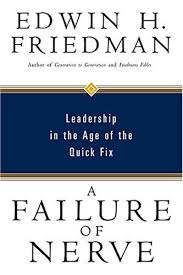 I made the startling discovery this morning, that the new version omits quite a bit from the original. It is more than a re-organization of Friedman’s manuscript. These omissions probably make it smoother and more like other non-fiction prose. But I find myself preferring the “voice” of the original in which I can clearly hear a Friedman I recognize.

For example I could not find this entire story in the new book:

One evening I boarded a flight in Dallas headed for New York. At least 20 minutes went by past take-off time, and the doors still had not been closed.  When I asked the chief flight attendant what the problem was  she replied that the smoke detector in one of the lavatories was broken and they were waiting for someone to fix it. Appalled at how many people-hours were being wasted, I asked,  “Why don’t you just rip it out  or seal it off?” “Oh sir,” she responded, “you can’t do that.” When I went back to my seat, my neighbor and I began to commiserate. He was a liquor distributor and several of his young-adult children worked for him. The conversation got around to women in the market place, and I asked him if he planned to bring his daughter into what was traditionally a a man’s world. He answered, “I had been hesitant, even though she’s probably the most competent and responsible member of the litter. But after a recent experience, I have changed my mind.”

He told me this story. His daughter had been working for an ad agency that had a deadline for a multimillion dollar proposal. Everyone went home, leaving her in charge of making sure that the proposal made the last plane out. But someone snafued, and they missed the overnight mail deadline. So on her own, she called the airport, found out the cost of a private jet, and decided that as extravagant as the cost might be, it was a small price to pay to insure the contract. When her immediate superiors came in the next morning and found out what she had done on her own responsibility, they were furious; but, said her father, “That’s when I decided to take her into the business.”

This book is about separating the “women” from the “girls.” Here is how I shall go about it.

Friedman was contrasting the passivity of the chief flight attendant with the ingenuity of the passenger’s daughter.  Maybe the new editors found the whole story too dated and sexist. On the other hand, it caused me to think about Friedman’s point of what kind of leader he tried to help, one that, in his words, is committed to a lifetime of “continual self-regulated growth” and “transformation” by “one’s experience.”

I find this encouraging since the college students I rub shoulders with at Hope tend to be very conservative and at least admire the titans of commerce.

The justices agree that this case is “odd,” but that’s all, I guess. 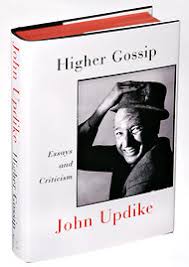 I am life long admirer and reader of the late John Updike. Glad to see more of his prose being made available.

The Certainty of Memory Has Its Day in Court – NYTimes.com

I wasn’t aware of Goldner’s work. Probably will have to read her.

The Certainty of Memory Has Its Day in Court – NYTimes.com

I am very interested in memory and brain science. I hadn’t thought of the implications of the new thinking for court cases. Wow.

Tool Reveals Which Celebs, Models Have Been Photoshopped

Thanks to daughter, Elizabeth, for pointing me to this article.