I’m basically very sorry about that because I agree with Jimmy Carter that this administration is one of the worst in history. I think it has fundamentally changed what it means to be American moving us closer to a country dominated by state secrets, business interests and stoking the flames of hatred for political purposes.

After the vote yesterday in which the Democratic leadership (except Pelosi) capitulated to the President on the funding for the war, I find myself listening to Dennis Kucinich 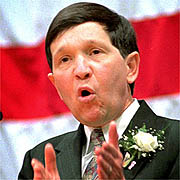 Kucinich is kooky, yes. But he’s one of the few people making sense to me. It reminds me of Eugene Debs:

You know this guy. He ran for president time and time again.

I’m starting to feel that way again. I understand that all “governments are jerks” (This is a quote from a woman I met in college from Romania. She convinced me this is true.)

And that corruption is probably inevitable. But on a continuum of idealism vs. corruption, the US is way over in the corrupt area from my point of view.

The War? I guess we’re fighting the war for the troops, right? That’s the way the funding has been FRAMED (as they say) by the people voting for it. Wait a minute. Don’t the troops do what the civilian leadership tell them to? Don’t they want to come home? Help the troops? Let’s stop funding this war and let them come home.

Either the “sermon on the mount” makes sense or it doesn’t. Either Debs makes sense or he doesn’t. I think “do unto others” and “if anyone is hurting, all are” make sense.

And don’t get me started on Gonzalez and Gooding.