I found this on Boing Boing. I love the internet.

I woke up with a sneezing fit (remnants of my recent cold) so I came downstairs in order not to disturb my lovely wife’s sleep.

I don’t have much to write about today. Or rather I’m not feeling much like blogging.

Yesterday was a prety good day. The high point was getting a phone call from the DC daughter (soon to be the NYC daughter). It is such a pleasure to have grown up kids. I recommend it to all.

Other fun parts of the day include taking a cell phone call from my parents’ lawyer in the middle of a chat with Jonathon.  I was feeling frisky and the lawyer is a former choir member, so when I saw his name on the I.D. I answered and said in a goofy low sexy voice:

Pause. I don’t think he knew how to respond. His spluttering thereafter sounded like he thought he had the wrong number. When he determined that he was indeed talking to Steve Jenkins, he asked me if I always answered the phone with a sultry voice. I told him only if I knew it was him. Heh.

I did spend an inordinate amount of time on the cell with the lawyer and bankers yesterday.

Still trying to clear up details on my parents assets and medicaid application.  Supposedly all my leg work for this stage of the process is done. I’m going to call the lawyer (deep voice ready) today at noon to verify that.

I had a nice productive chat with Jonathan yesterday. We are strategizing about the upcoming gig. He allowed me to add my recent composition, “One Page Essay: from Brahms to Satie” (pdf) to the beginning of the set list. We are mostly in a trimming mode. But still trying to fully utilize the talents of the other two players (Kevin the drummer and Jordan the sax player extraordinaire). We decided to ask the drummer to do a four minute solo toward the end of the evening to allow him to do whatever he wants. We came up with this after Jonathon mentioned that whenever he has played with Kevin he spontaneously offers to do a drum solo at some point in the evening. I responded, let’s put it in the list.

We dropped “They just got married” by Randy Newman. Good tune but it had to go. We abbreviated “Under the Sea” and added a surprise trombone solo by Jonathan. We also rehearsed this. Fun stuff.

Jordan the sax guy has proposed a funky tune called “Chromazone” by Mike Stern. Very cool tune. Kevin pointed out that the Youtube version linked above was made when he was one year old. I told him “At least you were alive.” So if he was one in 1990, I guess that makes him 20 years old. Tut tut tut. Young people today.

Anyway, Jordan sent me the chart (jazz for sheet music, heh) and I worked on the bass line that begins the video. I think I just about have it down. It will require continual practice to play well in public. We might not have it together for this gig. But hopefully this talented group of musicians will play with me again. Soon.

My boss read the staff another Friedman Fable.

Friedman continues to guide me from the grave.  I spent a bit of time talking to Jonathan yesterday about family systems.  (A quick definition of this concept is that when considering functioning the smallest unit of consideration is never one person but two or more usually more).  I found Friedman’s rope fable online this morning. My boss recently read this one to the staff to help introduce to them to a more healthy discussion of boundary issues and grown up behavior in church leaders.  Plus she had a presenter come and do an open session on family systems. The staff seems quite taken with it which is a good omen for better function in the future. In my opinion anyway.

I like the picture below. Found it on Oysterism also via Boing Boing. I love the internets. 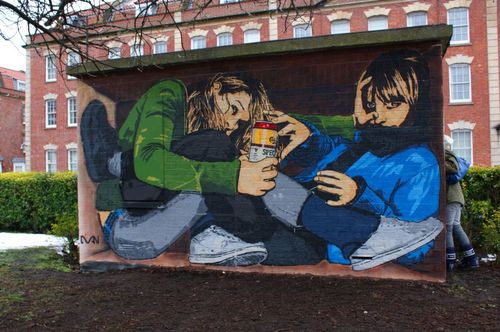