The melody for our closing hymn Sunday will be Jerusalem by Sir Hubert Parry.

It is paired with Carl Daw’s lovely text:

O day of peace that dimly shines
through all our hopes and prayers and dreams,
guide us to justice, truth, and love,
delivered from our selfish schemes.
May the swords of hate fall from our hands,
our hearts from envy find release,
till by God’s grace our warring world
shall see Christ’s promised reign of peace.

Then shall the wolf dwell with the lamb,
nor shall the fierce devour the small;
as beasts and cattle calmly graze,
a little child shall lead them all.
Then enemies shall learn to love,
all creatures find their true accord;
the hope of peace shall be fulfilled,
for all the earth shall know the Lord.

I recently purchased an interesting collection of music written “In Memory of Hubert Parry.”

It looks something like this, but it’s gray and old. 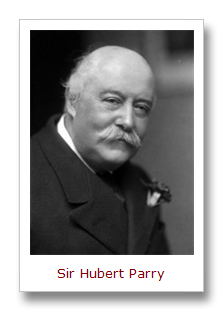 It seems to be sort of a musical festschrift. It’s inscribed:

“At Sir Hubert Parry’s funeral in St. Paul’s Cathedral on October 16th 1918, a few of his friends made a small wreath of melodies, which were woven together and played. The pieces in this Book have been written and given by these friends and a few besides, as a rather larger wreath, in loving memory of him. The title of the book was suggested by the original heading on his own piece (which stands as the first of them), ‘For the Little Organ Book.'”

I am playing the Parry piece as a prelude this Sunday.

For the postlude I have chosen one by another Anglican composer I admire: William Mathias. 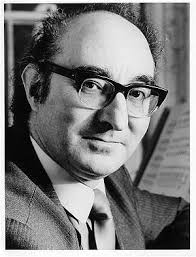 I once heard a musician who had interviewed him speculate that Mathias wasn’t exactly of this world, that he was a bit on the weird, flaky side. I think this made me like his music even more.

I usually try not to do church stuff on Monday. But Eileen and I are escaping Holland for a couple of days. We are meeting a friend at her cottage on Lake Michigan. So I picked music yesterday and had also had a silly meeting. I told my Worship Commission last night that I was making a last ditch effort at some badly needed R & R.

I probably won’t be able to post tomorrow morning due to lack of internet connection. I figure I have about 20 to 50 hits a day judging from the counter I have on the website, so dear reader my hiatus will probably only be for a day or so.

In the meantime, links:

Nasty School and Other Poems – By Shel Silverstein – NYTimes.com

I have always admired the late Shel Silverstein. The NYT had some nice stuff by and about him this past weekend.

The Yesees said yes to anything
That anyone suggested.
The Noees said no to everything
Unless it was proven and tested.
So the Yesees all died of much too much
And the Noees all died of fright,
But somehow I think the Thinkforyourselfees
All came out all right.

Stuff seems to be happening in Libya. Some interesting comments in this article.

In Ohio and Wisconsin, G.O.P. Reaching Out to Angry Democrats – NYTimes.com

Angry people all around. Posturing leaders and spluttering losing Democrats.

How Italy Is Adjusting – NYTimes.com

Update from Italy from an Italian.

Undue Child Focus is a pathology my hero, Ed Friedman, point out as part of the “stuckness” of our times.  So I am often skeptical about attitudes toward children. But this is an interesting history of society moving from protecting the weak to protecting the powerful.

Stephen Colbert’s PAC Is More Than a Gag – NYTimes.com

Literary Review – John Sutherland on The World of Others: From Quotations to Culture

Ever heard of turnitin.com? It’s a service that traces unattributed lifting from sources. A cheater’s nightmare.

Wall Street Aristocracy Got $1.2 Trillion in Loans from Fed – Bloomberg

My daughter, Elizabeth, linked this on in on Facebook commenting: “?$1,200,000,000,000 (tax payer money!) in secret loans to Bank of America, Citigroup, Morgan Stanley, and other banks/brokerage firms? I do not understand.”

1 thought on “nor shall the fierce devour the small”