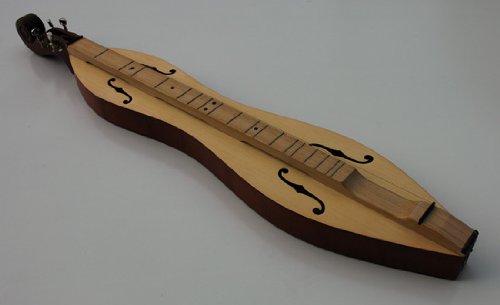 Last Saturday night was the Grace Music Ministry party. It was a small gathering of mostly people who have been in the program for decades.  It was held at a member’s home. At one point he brought out a lovely Kentucky dulcimer to show me.

When my father was minister of a Church of God congregation in Flint Michigan in the sixties, I remember a pale young woman who came to us from Berea College in Kentucky. She brought with her a dulcimer which I remember she played and sang. Her song was a lovely gentle addition to our community. She sounded a bit like this video.

My choir member asked me if I could show him something on the dulcimer. I vaguely remembered that dulcimers are mostly drone and have one melody string. I glanced at the pitch pipe he had and attempted to tune the first, highest, string to the highest pitch on the pipe. It immediately broke. I felt embarrassed. The owner assured me that he himself often broke strings trying to tune it. He even had an extra string handy. So we restrung it. This time I pulled out his handy dandy “how-to-play-the-dulcimer” book and figured out exactly what pitches the strings should be. They had nothing to do with the notes on the pitch pipe which I noticed were the first four strings on a guitar or the strings of an electric bass.

With a little finagling, I managed to tune it up and play a few tunes on it. I showed the guy who owned it how easy it really was to follow the numbers written over the pitches in the book. He seemed pretty happy about that.

I also showed him carefully which pitches were needed to put the thing in playing tune.

Later his wife brought out her collection of drums and percussion instruments. They were mostly things they had picked up on missionary trips to reservations.  They mentioned Lakota and Pueblo tribes.

After being invited, the crew sitting around at the party gamely took them up and began gently banging on them. They even had an Indian flute which I managed to get working. It had an ornamental buffalo tied to it which was blocking the whistle hole. After I moved it, it played more easily although with limited range. One of the choir members is a recorder player and he goofed around on it.

It was a relaxed moment.

Floating over the drum and flute sound I heard the sound of birds singing as the sun was setting. I was reminded of Messiaen’s contention that birds are the musical geniuses of the planet. I couldn’t disagree.

A few days ago, I stumbled across a service that Hope College (the college where I sometimes work as ballet accompanist) was temporarily trying out an online academic book service.  It took me a couple days to get it to work on my netbook off campus but I managed to do so last night.

According to the library web site, the trial period ends this Friday.

I have been thinking more about Mendelssohn and I immediately began reading this biography on ebrary. It reflects more modern scholarship and I am relieved to find that it agrees more with my assessment of Mendelssohn as a good composer.

The preface even outlined the history of his reputation. It peaked at his death when he was considered a tragic loss for beauty. His work was immediately attacked by Wagner and others. Wagner himself wrote anti-semitic diatribes about Mendelssohn.

Mendelssohn’s relationship to his own considerable heritage is complex. His grandfather, Moses Mendelssohn, is an important philosopher who once beat Immanuel Kant to an important philosophy award. Moses was Jewish. Part of his philosophical contribution was to raise the then radical notion that Jews and Christians could co-exist beneficially for each other.

Mendelssohn’s parents raised him Lutheran. They themselves secretly converted abandoning their own Jewish heritage for Chrisitan.

This kind of “assimilation” looks almost embarrassing from the 21st century. Nevertheless it made sense to the people at the time.

Mendelssohn was aware of and appreciated his heritage.

Later the 20th century’s view of Victorianism in general was another blow in the distortion of Mendelssohn’s work.  His work was lumped together with much lighter music of the Victorian era  was seen as “effeminate” and not profound.

It is only post-modern scholarship that has sought to understand him more clearly and appreciate his musical contribution.

I find all this pretty helpful.

Benoir Denizet-Lewis, the writer of this article, goes to visit Michael Glatz,  an old friend of his. They were both gay activists together as young men. Michael went from articulate calm spokesperson for queer theory and sane gay stuff to a pretty conservative fundamentalist Christian who denies that homosexuality is at all genetic and can be “cured.”

It’s a sad fascinating even-handed telling of the story.

90 Years After a Bloody Race Riot, Tulsa Confronts Its Past – NYTimes.com

Only ninety years ago,  America suffered it’s mostly bloody ethnic cleansing.  For years the memory of it was buried. Even now, it’s only taught in a few US history books.