Had difficulty not thinking about church stuff yesterday. I realized that I witnessed three communication problems there within 24 hours. Two education series that were not on the supposedly master google calander, broken links on the web site, and a version of the closing hymn Sunday in the bulletin that was so garbled as to be totally unusable. I seem to be turning into one of those nitpicking old asshole guys. Fuck the duck.

It usually seems ironic to me that I put such effort into my organ music because it is such a subtle and ephemeral aspect of how people perceive my work. But I guess performing can never be primarily focused on the perceptions and/or attention of the listener. It has to begin and focus on the work itself. So that’s what I’m trying to do for Sunday.

I had a nice walk and breakfast with my wife before she left for work. We admired the art work of a young friend of ours, Emily Hunt, at the coffeeshop LemonJellos. One piece  was called “rebirth” and was sort of a hanging mobile of little bits of burlap with clumps of earth in them. One of them was beginning to sprout. I guess the eventual piece includes the sprouting of some or all of the others. Very cool.

Eileen spent a great deal of time and a lot of effort preparing soil and planting a little vegetable garden behind our garage this weekend.

My assignment was to turn to the sprinklers on and off yesterday. Which I did.

I ran across a very cool video of Jamaican Kincaid talking about and reading her work. Put it on Facebook but here’ s a [link]. I only listened to about an hour of it. Ironically (since it is an MIT link) I could find no way to pause the fucking thing. So I couldn’t return to it after a break. Oh well.

I had to interrupt it to take food to Eileen at work. Her boss gave herself an Ipad as a graduation gift (her second masters). I just find the Ipads so useless. All glitter, no gold for steve. I object to the proprietary nature of the access to stuff on it and find the touch screen and the balance trick (shifting from horizontal to vertical when you flip the thing) unimpressive. It also looks a bit like an Iphone for the visually impaired.

When I came home I sat with my new score and listened to the entirety of Stravinsky’s Rite of Spring. This is a labyrinth of a work and it continues to strike me how influential (and reflective of non academic music and ideas) it was. Unfortunately I discovered my score fluctuates in size on the page and therefore in legibility. This morning I started jotting out little transcriptions of themes in my notebook. Realized I wasn’t sure if the score was one that reflected the transposition of the instrument or was a C score. Usually I can tell by simply looking at the harmony. Not so much with Stravinsky. 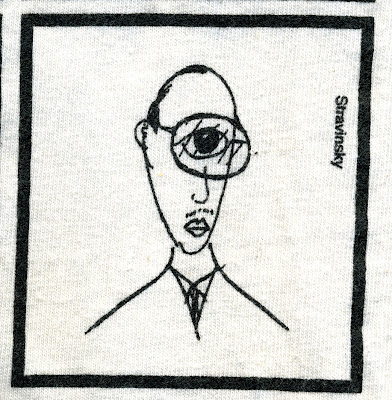 I will utilize the materials I have, but there do exist more legible versions of this work including a four hand piano version. Nothing online so far.

One of the thing that interests me about Stravinsky is determining how derivative he was in developing his materials. I have looked at Bartok and Messiaen pretty analytically and know of times when they derive their material unabashedly from other sources, not only folk music but other composers. I like this because I like their work and am interested how they arrived at their compositional decisions. If indeed that is possible to determine. I have been thinking about the derivative nature of my own work. I remember basing a section of my pretty successful oboe sonatina on a little Hungarian folk song that Bartok has set in a simple piano version. Hmmm.