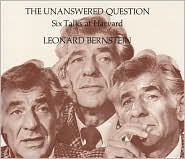 Read in Bernstein’s “The Unanswered Question” Harvard lectures this morning while exercising. I guess it’s interesting that he is using Noam Chomsky’s linguistic stuff to talk about music.

I think I got a handle on the 13th chords in Antonio Carolos Jobim’s “Wave.” I looked them up in several places and finally they started coming natural to me.

Jordan and I kicked some serious ass yesterday at church (musically speaking). Of course none of the degreed musicians were there but what the hell. The Jobim piece came off well. It took Jordan a couple of choruses to loosen up. He was just hitting his stride toward the end of the piece. The Milhaud went very well I thought. I’m afraid I have influenced Jordan’s interp on this one quite a bit. He started out wanting it to go faster than I could play it. He ended up satisfied (I think) with me finding a groove he could play with.

Anyway, what with the usual congregational singing, Jordan, Theresa the flute player, Professor Dave on Bass and Dave the stockbroker on guitar, it was a pretty musicalSunday I thought.

My composer group meets Friday so I want to finish up the silly little setting I have been working on for this group.

I have a gig coming up with Nate the bass player. We accepted the gig knowing that Jordan couldn’t play. Bah. This would be more fun with him. I have been working over my own tunes. Re-arranging  them. Thinking about recording soon. These tunes are quite the ticket for this gig. I have theme for Peter Gunn ready and even the theme from Perry Mason. Not sure if we should do these or not.

This is supposed to be sort of a jazz gig. We are warming up for the “what-nots.” I wonder if these are their CDs?

I have though of doing some tunes like “Ruby my dear.” Also maybe improvising on themes from John Adams’s “Phrygian Gates.” That piece is too long anyway.

I picked out hymns for the next three weeks at church. My boss hops on a plane soon to go to Annaheim for the national convention of the Episcopal church.

I now have a full set of committed parishioners to do the movement I chose from Bach’s BWV 84.  Now I have to finish preparing scores beginning with the violin score.

I am hoping to do my Mom’s medicaid application today. And then try to get it in the mail (and in the lawyer’s hands) on Tuesday. We’ll see. This keeps falling to the back burner.

Speaking of burners, I have been doing a bit more cooking lately.

Made a pie for the new neighbors. That sort of thing. Re-organized the kitchen a bit yesterday just for the heck of it. I still want to completely re-arrange and organize my house. But it’s such a big job and I have tons and tons of other people’s stuff everywhere. My goal is to sort, discard and put stuff in easily accessible places. Hah.