I listened to Bob Garfield’s interview of Newton Minow this morning and it got me thinking once again about media literacy. A passing remark Garfield made about people taking their Facebook feed at face value startled me. George Minow was FCC under JFK so he’s been around a long time. Minow’s solution to our current predicament of culture wars, fake news, and (Garfield’s phrase, of course) a rogue president is education.

warning: jupe gets a bit preachy from here on

A big piece of this education is helping people be literate about how they use the internet for news and information. I have done a bit of thinking about this over the years and I sometimes neglect to factor in that so many people take what they find online at face value. This is unthinkable for me.

It seems to me that Facebook itself would be a good spot to bring this topic up. I checked and there are some Media literacy pages. I immediately “liked” Milclicks (started by Unesco. “The MIL CLICKS acronym stands for: Media and Information Literacy, Critical thinking/Creativity, Literacy, Intercultural, Citizenship, Knowledge and Sustainability”

It’s good to remember that people are using the interwebs largely  uncritically. This is necessary to perpetuate the climate of idiocy that has taken hold of the USA. Everyday I see stupid stupid things on Facebook coming from both the far right and the far left. Stupidity is stupidity no matter where it’s coming from.

My bar is not that high here when talking about what I see on Facebook. The level of exchange in the comments is often about as bad as anywhere else (at least anywhere I’m reading comments…). People talking past each other, calling each other names, posting memes that ridicule people they disagree with. The antiTrump memes are especially vicious. They remind me of the antiObama ones. And I’m pretty sure these sorts of extremes entrench us into our corners instead of opening any kind of a conversation or consideration of the other person on the other side.

This was on the Milclicks Facebook feed. It’s clever because people click on it to think about what to talk to their kids about, but many (most?) of us make these mistakes daily. I am surprised at the blank looks I sometimes get when I suggest looking at the URL for God’s sake when obtaining info. Ay yi yi.

Here are the suggestions from Milclick 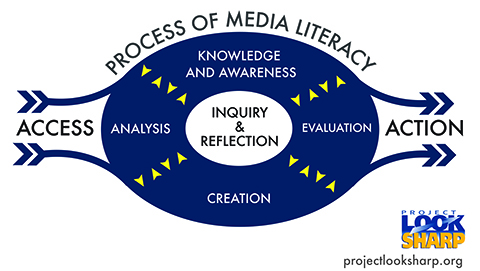 Here are a few basic questions to consider whenever you and your kids encounter a piece of media:

(Thanks to Project Look Sharp for these questions.)

(Thanks to Professor Melissa Zimdars of Merrimack College for some of these tips.)

If you click on Professor Zimdars link above you get the google doc she has been putting about of tips about finding and verifying info online.

Like it or not, we are in the midst of a second arts revolution – Chicago Tribune

My boss threw this link up on Facebook and tagged me. This is the sort of thing I think about a lot: how people are connecting to the arts in new and interesting ways.

A Prague Leader Tries to Bury a Bodies Exhibition, Once and for All – The New York Times

I’m not sure what I think of the exhibition but this certainly is a creative way to get rid of it in your city.

Cool idea. Dave Randall from the National Association of Scholars (that’s right it’s a right wing organization) was critical of the choices as too liberal, but “Asked if he had read several of the most popular titles, he said, “I looked at them enough to not be thrilled.” Some scholar.

I’m interested in this man’s work. I hadn’t heard of him before the obit.

Save Free Speech From Trolls – The New York Times

Some startling behavior described in this article. “Trolls” indeed.

I keep trying to keep my mind open but dissenting with Thomas is not a good sign.

A Life of Toscanini, Maestro With Passion and Principles – The New York Times

I’ve never been a fan of Toscanini, but this review saves one from reading the bio and was interesting to me.

Deportation a ‘Death Sentence’ to Adoptees After a Lifetime in the U.S. – The New York Times

Madness. People didn’t even know they had been adopted and are then deported.