Gene Luen Yang’s new graphic novel kid book, Prime Baby answers the question: what do you do when your new little sister start spouting prime number and ruins your plot to become president of the earth. 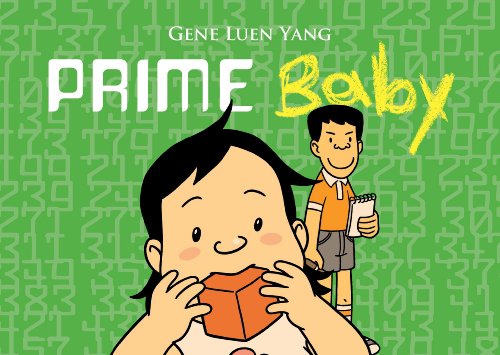 You can buy it or read it online here: [link to New York Times list of pdf files of the book]

If you click on the link above two things to keep in mind. First, the last chapter is linked to the title “Prime Baby: conclusion” at the top of the page. It took me a while to figure it out after I read the 17th chapter at the bottom of the list and felt like it couldn’t be the ending.

Secondly, you might want to make a mental note that this page also links you in to other online graphic novels for future or even immediate viewing.

I didn’t figure out until later that Yang is also co-author of the excellent collection The Eternal Smile.

This guy is fun. I just discovered by poking around on his web site [link] that he is going to be speaking at the Festival of Faith and Writing [link] that both my brother the priest and my boss the priest are attending this week in Grand Rapids. Hmmm.

I spent some extra time with my Mom yesterday, partly because I had the time available and partly because her psychiatrists surprised me with the notion that she is wrestling with some depression right now. I had not picked up on this so much.

Part of Friedman’s notion of survival in family system is to develop a “resistance to other people’s threshold of pain.” This is something I think about and practice regularly. Unfortunately, it has probably sometimes been a bit inappropriate to response to my Mom’s very real depression. What I mean by this is not taking her complaints too seriously but just seriously enough (Hi Mom!). Let’s face it, complaining can be fun and an important social lubricant much of the time.

Anyhoo, I managed to get her to do some shopping, buy my lunch and then go for a lovely drive here in blossoming tulip time Holyland michigan. A good time was had by all.

Another surprise I received was that somehow the assisted living facility which administers her meds discontinued giving her one of her important mood drugs (remeron) back in Jan of this year.

Hmmm. This cannot be helping her grief and depression. Her psychiatrist recommended resuming it in sensible very small doses to be increased gradually.

I did some asking and found out that the company that used to pay for Mom’s drugs sent a letter to her internist raising questions about possible drug interaction between drugs on the list of ones she is taking.

The internist (also my and Eileen’s doctor) apparently took the recommendation at face value and discontinued the drug.

I asked the head nurse at the assisted living facility to fax some info around regarding this beginning with faxing the letter to the psychiatrist. He is a gerontologist psych and playing with drugs is right up his alley. I thought he would have an opinion about the recommendation and should know about it.

The head nurse also promised to fax the psychiatrist’s recommendations to the internist.

The meeting with my boss went very well. She assured me that my behavior was not part of the problem at this stage. We talked through how I arrived at my insecurity (emails, phone calls, misread signals). We basically resumed our weekly collegial conversation without missing a beat.

The cool part was that by this time of day yesterday it was beautiful in Holland Michigan. I asked if we could meet outside. So we sat on a bench in the sun and had our talk.

My brother mentioned last night that he thought my boss was one of the sharper priests around. This is high praise from an experienced, cynical colleague.

I immediately agreed. It is true. Hell, she hired me, right?