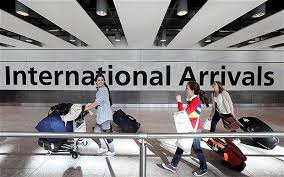 We made it to the UK. I slept more than Eileen did on our 8 hour flight. But we were both exhausted by the time we arrived around noon local time. We managed to get on the wifi at Heathrow and were able to communicate with Sarah and Matthew via WhatsApp, a messaging app we use to talk to our family around the world.

Sarah arrived shortly to drive us to her home in Calvert Green. We grabbed some sandwiches and drinks to go at Heathrow and ate in the car on the way. Their new home is in Calvert Green, half way between Aylesbury and  Bicester (pronounced BIST- ah). We went there directly.

Although Eileen and I were tired, we enjoyed holding Lucy for the first time and chatting with Sarah and Matthew.

Our temporary home in the UK is a comfortable couple of rooms in an old converted, one-story, barn.

The rustic beams are echoed in this painting on the wall.

It seems to be in the middle of a diary farm.

The exposed beams could well be from the original barn. But most of the interior is redone in a fanciful mix of antiques and late 20th century British kitsch. The setting is quite idyllic.

Despite being a one story building, there is a little loft with a balcony.

We settled in last night. Eileen hitting the sack as soon as she could. The proprietors had left a basket of goodies including wine which I availed myself of. Sarah dropped us off and returned with some plug adaptors (Brit to US), eggs, bagels, marmite, and juice.
The time change was difficult for me since I was not as exhausted as Eileen. Plus I had my eye on listening to the Vice presidential debates. There is wifi here in the barn, but it doesn’t work so well at the dining room table where I am sitting and writing off line. The pictures scattered throughout today’s post are ones I snapped this morning for that purpose.

I think I lost Tuesday. We left late Monday evening and arrived here in England around noon on Tuesday. But it seemed like the same day. Now I have a Wednesday ahead of me.

We couldn’t get the heat to work this morning. Eileen emailed the proprietors and soon a pleasant, chatty man in grubby work clothes stopped by and helped us. He managed to get it going after much grumbling about the system. “If it has four legs and it mooed, I’m more comfortable with it,” he said as he left, after gesturing at the fancy thermostat.

Snapped this pic through the Sarah’s car window. The proprietor’s brick home is to the left. Our “barn” is a long building on the right. There are two units. We are in the furthest one. The two windows are where I stand to do the internet with my computer. Right now I’m using the wifi at Sarah’s. It seems to be a bit quicker although Matthew has said it’s “rubbish.” He uses it for his business (buying and selling stuff online).