I was going to write about Joseph Campbell’s insights about the scene in Little Brier-Rose where everyone, not just her, falls asleep.

“She had no sooner touched the spindle when the magic curse was fulfilled, and she pricked herself in the finger. The instant that she felt the prick she fell onto a bed that was standing there, and she lay there in a deep sleep. And this sleep spread throughout the entire castle. The king and queen, who had just returned home, walked into the hall and began falling asleep, and all of their attendants as well. The horses fell asleep in their stalls, the dogs in the courtyard, the pigeons on the roof, the flies on the walls, and even the fire on the hearth flickered, stopped moving, and fell asleep. The roast stopped sizzling. The cook, who was about to pull kitchen boy’s hair for having done something wrong, let him loose and fell asleep. The wind stopped blowing, and outside the castle not a leaf was stirring in the trees.

Round about the castle a thorn hedge began to grow, and every year it became higher, until it finally surrounded and covered the entire castle. Finally nothing at all could be seen of it, not even the flag on the roof.”

It was this scene that he connected to a scene in the Eldest Lady’s Tale in the “One Thousand and One Nights,” where travelers stumble onto a island where everyone has suddenly turned to stone. 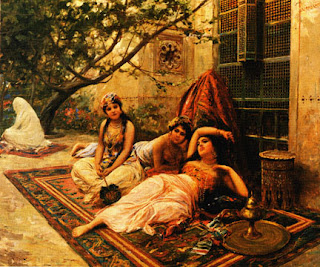 “So we landed, and going up into the city, saw at the gate men hending staves in hand, but when we drew near them, behold, they had been translated by the anger of Allah and had become stones. Then we entered the city and found all who therein woned into black stones enstoned. Not an inhabited house appeared to the espier, nor was there a blower of fire. We were awe-struck at the sight, and threaded the market streets, where we found the goods and gold and silver left lying in their places, and we were glad and said, “Doubtless there is some mystery in all this.”

However, I’m not sure I completely understand his insight, so I’ll just keep thinking about it.

This book came in at my request at the library yesterday. The topic is not as arcane as it might seem. Plus books written in the lasts decade or so have a tendency to be very readable and clear, more so than those written in the last two centuries. Probiert the author provides some witty ammunition to people who are interested in learning his subject.

He begins, “I do not think that intellectual pursuits should require justification; but for those who are embarking on the learning of the Greek accents and need to explain to their friends what has gotten into them, here are some excuses:”

He then lists off six bullet points including if one intends to “pursue ancient Greek papyrology, or palaeography, or textual criticism.”

Sheesh. I’m just a bit curious about how this works, that’s all.