Just listened to 30 minutes or so of this video. I was on boingboing. Then it stopped. I couldn’t get it to play past a certain point. But I still got quite a bit out of it. I especially liked his description of how he came to use and understand the internet. I had a similar experience. He begins talking about how he witnessed a significant change in the authority of the published word. I think his academia is showing.

I can remember the first time a college library reference worker googled when answering my question about what time it was in a certain part of Indiana. I was amazed that this was the way he did it. Indiana, if you don’t know, has at least one or two little pockets of time zones that are different from the rest of the state. I figured this librarian would have a better handle on web sites with reputable authority. He couldn’t answer my question using google.

I remember converting to having qualified confidence in wikipedia when I realized the many reference books (mostly but not all in my field of music and poetry) I had found serious errors in. I also realized that critical awareness and consumption (one of Rheingold five integral aspects of 20th cent literacy) was something I had been attempting for years. Especially regarding mass media like tv and movies.

I cultivate approaching things as though they were  a “made” thing which needs to be observed critically , contextually and carefully in order to be understood and used.

20th century literacy is not only skills but skills plus community

There are five necessary mutual fluencies in it. Attention, participation, cooperation, critical consumption and network awareness.

An interesting synchronicity occured just now. I was looking at a book in the reading room (bathroom). Reading in it actually. The book’s name is “Beethoven’s Anvil: Music in Mind and Culture.” It’s author is William L. Benzon. I bought it at a used book shop in the UK. Read a bit in it enough to know that the author’s topic and eloquence are interesting enough to continue reading it (at some point). Recently a high school band director waiting for his son in my living room picked it up and perused it but did not comment on it. Just now I flipped it over and found a blurb by Howard Rheingold on the back. I love it when that shit happens.

Kyle Gann has some interesting words in a recent post on his blog.

Speaking of titular colonicity (a term that has entered my vocabulary permanently), as we were, there’s another universal constant in academic writing that sends shivers up my spine: “lies outside the scope of this paper.” (I just Googled it and got 335,000 sites.) It appears so consistently once in every academic paper that you couldn’t force me to write it with two thugs twisting my arm. And yet, when I wrote my article “La Monte Young’s The Well-Tuned Piano” for Perspectives of New Music, the editors inserted it:

He goes on to quote the passage. Can you imagine that? The dang editor inserted that nonsense. Yikes.

Click on the pic below to see more of some upcoming Tate Liverpool Piccasso exhibition. 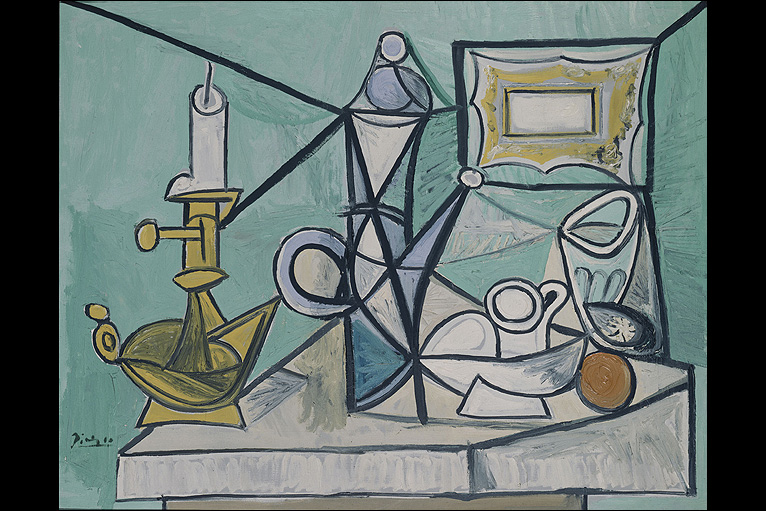 Adolf Hitler and his inner circle may have been a gang of thugs and murderers, but they imagined themselves to be nothing less than the saviors and guardians of high civilization.
When Otto Klemperer was dismissed as director of the Berlin State Opera because of his Jewish ancestry, he fled to Switzerland, disdaining a job with the Los Angeles Philharmonic until he discovered a warrant had been issued in Germany for his arrest. (By yet another twist of fate, his son, Werner, ended up playing a comical Nazi officer in the TV series “Hogan’s Heroes.”)

These quotes are from a fascinating (to me) review of the book, “A Windfall of Musicians: Hitler’s Emigres and Exiles in Southern California” by Dorothy Lamb Crawford  by Jonathan Kirsch. LA Times link
Well this is enough blogging before church. Today I am playing two pieces from the first significant book of keyboard music published: Buxheimer… around 1460.  I do like the sound of these pieces.