I was too busy to post here yesterday.  Since creating my own website (years before it was called blogging), I have an ideal of putting up fresh material daily. As a web user, when I look at a web site I am often interested in how recently it has been updated. Too stale, and I quickly move away if it’s a personal site like a blog.

It’s not that I think I have stuff that is interesting on a daily basis (although I do find life mostly very interesting), it’s just that one of my original ideas about the internet is that it could create an area of conversation.  In this, I see that my feeble attempts have not really succeeded. Relatively few people visit this site (around 30-40 hits a day according to my counter) and their comments are few. More often I figure people come and lurk and keep their ideas to themselves. Fair enough.

I recently heard a journalist disparage the comments section of his online paper. He felt that it served little purpose to hear the comments that were predictable and reactive. Apparently he couldn’t conceive of his work as part of a conversation. 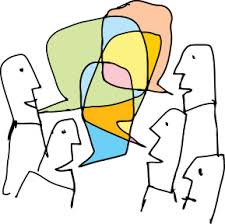 The metaphor of conversation is one that I think I got from Mortimer J. Adler. A quick google reveals this quote:

“What binds the authors together in an intellectual community is the great conversation in which they are engaged. In the works that come later in the sequence of years, we find authors listening to what their predecessors have had to say about this idea or that, this topic or that. They not only harken to the thought of their predecessors, they also respond to it by commenting on it in a variety of ways” Adler quoted in Wikipedia’s entry The Great Conversation and footnoted to “The Great Conversation Revisited,” in The Great Conversation: A Reader’s Guide to Great Books of the Western World, Encyclopædia Britannica, Inc., Chicago, 1990, p. 28.

I may  have learned about this dipping into this article or Adler may have referred to it in his How to Read a Book another book I have read, learned from and admire.

I have extended this idea to the arts. When I play music I think of myself as in conversation with the composer, the composer’s interpreters I have heard, and my teachers, hopefully doing a great deal of listening. This morning I am looking forward to performing a movement from a Haydn piano trio at church. I see this as a conversation with Haydn. Also with the other performers and whoever bothers to listen.

Last night I was in a very interesting musical conversation with two young adept musicians: Nate Walker on bass and Roman Tarchinski on percussion. We were performing for a charity gig and Nate (who is still in high school) called the tunes from the Jazz Real Books. We then wove our spontaneous interpretation of and variations on standard Jazz “heads” or melodies. Lots of fun!

These two are a pleasure to play with, both intelligent improvisers and listeners. I don’t get to improvise with other musicians that often these days.

This was the gig where they decided not to pay us.  The people at the charity event were very complimentary of our playing. Ironic.

Kate Atkinson has a new book. I like her writing quite a bit.

The driving moral force behind this switch was, of course, money. Never underestimate the Power of Profit, I tell myself.

The USA promises the UN to act more justly. But defends capital punishment. I still believe that states have no business taking lives. Incarceration, yes. But not killing.  Just my opinion.

Another step in the process. Unforunately IMNSHO not likely to change the outcome.

the really responsible thing would be to make corporations pay their fair share in taxes.

These companies like most pay no taxes. That’s less than you and I pay, right?

The named it “the Angolatitan adamastor — adamastor is a sea giant from Portuguese sailing myths.”

Why Qaddafi Has Already Lost – NYTimes.com

“Had Colonel Qaddafi responded with openness to the calls for reform and not overreacted to the uprisings in Tunisia and Egypt, the urban elite might have been placated, and the violent rebellion avoided. He blew it. Once his army and police shot at protesters, the pent-up disaffection of Libyan society was unleashed, and it is too late for the regime to bottle it up. In recent weeks the revolt has even gained support from the historically pro-Qaddafi rural populace. No matter how much blood is shed today, the uprising will not be stopped.”