The title of today’s post is the last line of a poem by Gertrude Stein ( IF I TOLD HIM A Completed Portrait of Picassoif you click on this link, be sure and listen to Stein read it) 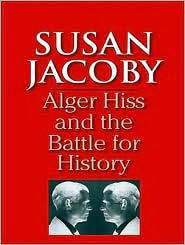 I buried myself in Susan Jacoby’s 2009 study, “Alger HIss and the Battle for History,” last night.

I find it fascinating that Roosevelt was in a even more dire situation than Obama when he was inaugurated:

The factsof the nationwide economic collapse [of the thirties], as unfamiliar to young Americans today as any battle described by Thucydides, were grim and terrifying. The unofficial unemployment rate was around 25 percent, although that was probably an underestimate, becaue married women were generally left out of the calculus–even though many were looking desperately for any kind of work becaus their husbands had lost their jobs–and because so many people had lost their homes and were literally on the road, far from the reach of government statisticians. At any rate, the number of the officially unemployed, according to most analyses, was somewhere between thirteen million and seventeen million.

A quick glance at the Department of Labor’s web site reveals that in May of 2009, the number of unemployed persons increased by 787,000 to 14.5 million and the rate rose to 9.4 percent.

On the Friday before Roosevelt’s inauguration, the New York Stock Exchange suspended trading indefinitely. The United States Steel Corporation had laid off ALL of its full-time employees. More than five thousand banks had failed since the stock market crash of 1929, taking the life savings of millions of Americans with them. Each of these statistics represented broken lives.

There was such panic, that pundits of all ilk did not hesitate to advise Roosevelt to consider acting unilaterally. Unbelievably in the light of today’s weird rhetoric they actualy used the word, “dictator.” Jacoby continues:

The New York Herald Tribune covered the inauguration under the headline, “For Dictatorship if Necessary.” Walter Lippmann, who spoke for the left-leaning policitical elite in the media, advised FDR in February, “The situation is critical, Franklin. You may have no alternative but to assume dictatorial powers.”

Since my blog seems to be a bit jumpy today and refusing to reload on editing, I think I’m just going to publish this much.