I buckled down and finished reading all of the poems in Endpoint and other poems, John Updike’s posthumous final collection of poetry. I purchased an earlier collection of his poems when I was a kid. My tattered paperback copy laying next to my netbook looks very much like the one above.  This little book collects two volumes of poetry Updike had written in the 50s and 60s. The copyright on its introduction is 1965. 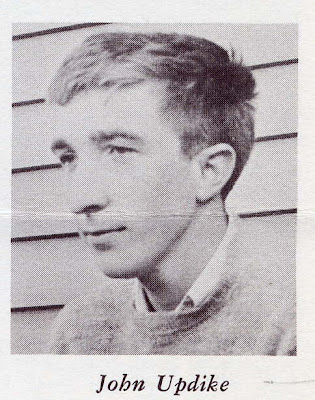 This is the young Updike around that time. Endpoint and other poems is striking because it really comes at the end of Updike’s long career as primarily a novelist.  I have read many maybe even most of his novels.  I have admired his ability to smoothly and clearly write about what it’s like to be alive in his time. I have also admired his brutal depiction of recognizable and slightly exaggerated examples of all kinds of human frailty and self-deception. The greatest portrait of course is of the befuddled, self-centered, aging high school basketball star turned car salesman, Rabbit.

His novels about Rabbit span and detail the US in the 60s, 70s and 80s. My father warned me away from them as a young person saying they were about nothing but sex. Needless to say this heightened their attraction for me even though I didn’t seriously sit down and read them until years later after his comment.

Ironic to the end, Updike captures his point of nicely in his final poems:

Instead, a shrug and tearless eyes
Will great my overdue demise,
The wide response will be, I know
“I thought he died a while ago.”

from “Requiem” by Updike

And if it were a tap I turn it on,
not hot or cold but tepid infotainment,
and out it gushes, sparkling evidence
of conflict, misery, concupiscence
let loose on little leashes, in remissions
of eager advertising that  envisions
on our behalf the better life contingent
upon some buy, some acquisition.

from “TV” by Updike

Enough poetry. but I do like the phrase “concupiscence let loose on little leashes.”  My own little self imposed leashes have historically not been of the sexual kind, but desires and passions have I many and it is amusing to picture them “on little leashes.”

I have also been reading in Ackroyd’s London the biography. I can see in it the factual background for the novel of his I have just finished, English Music.

In London the biography Ackroyd again uses Hogarth. But now he does so specifically. He cites Hogarth’s prints as depicting areas of his subject.

So he mentions the wonderful Gin Lane (above) in both books. In the novel, characters enter this scene and witness first hand the death of the falling infant and the sounds of corruption. In the biography, the print is cited as sort of documentary evidence of a exceedingly unsavory section of  London at a certain time in its history. Southwark Fair depicts the young theater district. If you look closely you can see Punch the puppet and actors acting the story of the wooden horse of Troy.

Finally, I escaped into the wonderful sardonic witty prose of Martin Amis last night. I have decided to add him and his father, Kingsley, to my list of writers to read.