Firstly, let me apologize if you are having problems accessing my web site. My brother emailed me yesterday and said it was intermittent. I find myself that some mornings I have to wait and wait to get it to load as I am writing and editing. I find more and more that I am at the mercy of devices which no longer function in simple ways. Figuring out how to use them and then how to respond to their glitches is a weird part of being alive now.

This morning I was laying in bed dozing listening to an online reading of John LeCarré’s A Murder of Quality. Suddenly I hear Microsoft’ little reboot song. I wait patiently for the computer to reboot, but of course it doesn’t. I time it. It had been shutting down for several minutes. Stalled, I thought and held down the on switch to turn it off completely, let it cool down and reboot it.

I love that to turn off devices mostly one has to hold down their on switch.

Last night Eileen was tangling with teaching her Kindle Fire to allow her to go back in a Kindle book and read an earlier volume. It kept offering to sync her devices to the furthest read point. This of course was a book at the end of multi volume Kindle book which she had read and had inspired her to read an earlier book in the series. It turns out the only way (or the way we figured out) to do this is to go to Manage Your Kindle on Amazon (via a web browser) and tell it to stop that.

I keep thinking that Kindle books and probably ebooks in general are not designed for or by readers. Which is weird. But the convenience is large and trumps the idiocy for me.

So I had two days off and I am not feeling terribly rested this morning.

Yesterday mid afternoon I was overcome with fatigue. What’s that all about? This fatigue is mental as well as physical. It might even be more mental than physical. At any rate I face a long day today and am reasonably sure I will acquit myself competently in the tasks I set for myself like ballet accompaniment and choir rehearsal.

I finished the second party of Organ 101 (link). I broke the TV cart at church preparing for this presentation. The wheel snapped off and I discovered how heavy a large screen TV cart actually is as I prevented it from toppling.

My boss suggested we just have the meeting where the cart was. I told her the wifi was insufficient and I couldn’t get a good signal. She informed me that it had been upgraded a couple of years ago. Hmmm. She was right and it worked fine. I wonder why I’m not a bit more on the communication track. Probably I’m too standoffish.

I was going to crawl up inside the organ loft and get a reed pipe and a flue pipe for show and tell for the organ committee. Then I realized that I wanted to practice and would be missing the notes for those pipes. So I delayed that until just before the meeting. Getting to the organ chamber involves climbing a ladder and getting up into a little room which can only be accessed in this manner. I have had visions of me killing myself doing this.

But obviously I did not.

I practiced Bach (this Sunday’s prelude and postlude) and Hindemith Sonata 1 for organ. I want to excerpt the Hindemith. 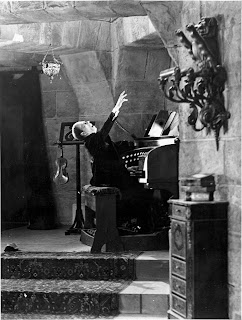 Usually I play the fake trio sonata in the middle as a prelude. I played through the first movement and decided it wouldn’t make too much sense in the church context because it kind of demands that the listener pay attention (Hah!). So I decided to do the  loud section as the postlude as I have done in the past, but then use the concluding section of the sonata which is quite lovely and delicate for the prelude. Hindemith makes so much sense to me musically. I wonder why I don’t see him being performed more.