Got up and treadmilled yesterday then off to doctor for my four month check-up. According to the doctor’s scales, I have lost one pound since my last visit. Bah. Also my blood pressure was  a little high. I pointed out to my doctor that when I went to pay my co-pay, I discovered I had misplaced my credit/debit card. I think this may have temporarily elevated my blood pressure.

Anyway, my doctor carefully reviewed my recent blood tests and other tests. She told me that maybe next time she would prescribe something to lower cholesterol. In the meantime, we agreed I would cut down on dietary cholesterol, mainly lowering my cheese intake.

She also recommended Glucosamine with chondroitin because I told her I am beginning to experience some arthritic pain in my left thumb joint. Arthritis is the bane of musicians. So far my pain has not affected my playing in any way I have detected. But it does frighten me a bit. At the same time I realize the old body is wearing out. 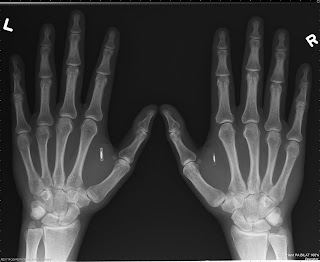 My doctor was happy with my exercise regimen (treadmilling). She also said she thought I understood my health issues well enough to continue to address them by seeking to lose weight and watching my diet. Back in four months.

Eileen and I went out for breakfast after I got home. Then went to see “Cloudy with a Chance of Meatballs” in 3D.

Embarrassingly I really enjoyed it. Much more than I thought I would. I thought it was funny and distracting. It seemed to be largely conceived for 3D. I’m wondering what it will be like as a DVD. Eileen says that she regularly checks out 3D DVDs to patrons at the library, so maybe they will issue it in 3D. At any rate, the jokes (many of which were adult) came fast and furious and it definitely warrants seeing this one again.

I have been madly trying to finish the bio of Mendelssohn I am reading. So I read in that yesterday while treadmilling. After the movie, I came home and read a bit in Ulysses. Then Eileen trounced me at Scrabble ™ and I went practiced organ…

My recent analysis of Part’s organ piece (Mein Weg hat Gipfel und Wellentaler) is helping me understand it better as I play it.

In his book on Part, Paul Hillier says that it definitely helps performances of Part’s music if the performer is in the right relationship to the music being performed. This is kind of enlightening because for a long time I knew very few classically trained musicians who could tolerate any minimalism or simple music like Part.

In fact, at first I wasn’t too entranced with the whole phenomenon myself. It wasn’t until I realized its relationship to my already formed aesthetic (factoring in the highly repetitive nature of much of the rock music I group up listening and playing) that I realized its attraction.

I found my credit card, by the way.