I spent a couple hours yesterday cleaning my porch. It has grown into a hodge podge of stuff combining several layers of junk. All my CDs are out there and that is quite a number. Also boxes from my parents.

Thumbing through the stacks and boxes of papers that mostly needed discarding I found little notes that my Mom had made to herself, many throughout Dad’s decline. Many of these are prayers.  Some of them are left over from her stay in a psych ward.

Reading them makes me wonder where that woman went. Is she still there in the person sitting quietly in her nursing home room not far from here?  Mostly likely she is. But she rarely speaks of her faith and struggle now. 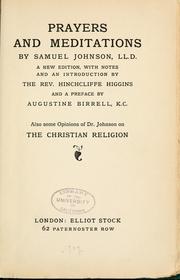 This morning I discovered that the writer Samuel Johnson also wrote prayers to cope with his struggles with depression. He did so conscious of the beauty of the collects that Cranmer wrote for the Book of Common Prayer.

Eileen and I stumbled across a pretty interesting movie last night.

I find myself less and less drawn to movies and tv. I tell myself it’s because I can’t relate to the ones being made. Of course it is probably also about me changing as well.

“The Pervert’s Guide to Ideology” drew me in pretty quickly.  I didn’t realize until this morning that the person speaking throughout was not a film maker, but a public intellectual of sorts, Slavoj Žižek, a philosopher, cultural critic and psychoanalyst. It’s kind of goofy, definitely preachy, but I think I like this movie quite a bit.

Throughout the film, Slavoj Žižek is seen speaking seemingly extemporaneously in the mode of a professor about ideology. The film uses movies to make its point  and the film maker has inserted the lecturing  Slavoj Žižek into the film sets themselves. Above, he is sitting in the bathroom from “Full Metal Jacket” where one of the characters commits suicide.

Eileen and I watched it on Netflix, it seems to be on YouTube as well.

Now to check out some of the movies it uses.

I had to catch up on my NYT yesterday, since I neglected to treadmill two days in a row. Skipping exercising also seems to mean skipping reading the paper.

This link is disturbing. More and more,  I am learning how our government keeps itself secret from us.

2. Jeb Bush Gives Party Something to Think About – NYTimes.com

Interesting portrait of Jeb Bush including a partial list of the books on his Kindle. I love this kind of shit.