Yesterday in my beginning ballet class, the teacher asked me if I would step on the floor and partner with a student in an exercise. This is hilarious and fulfills many of my acquaintances’s visualization of me, an old fat guy, in a ballet class. I, of course, did so much to the class’s amused approval.

The exercise was one in which two people kneel facing each other, align their spines, and gently push each other with the top of their heads.

Then the teacher for some reason used me to demonstrate the next exercise where one partner gently places his or her hand on the top of the person’s head while standing and keeps it their as the person slightly bends their knees.  Again this is about alignment.

They spent most of the hour doing all sorts of these kinds of exercises.

They have been doing an exercise which involves in succession 6 steps, turn; 5 steps, turn; 4 steps, turn; 3 steps, turn; 2 steps, turn; turn, turn.  In their first class I was asked to improvise music to fit this rhythmically. Which I did. Then, in each succeeding class, the teacher returned to this exercise. I repeated my improvisation a couple of classes, then changed it, then decided it might make a neat compositional problem to write a melody that would fit this and still be easy for the dancers to hear the changes in.

I was playing through this when the teacher arrived yesterday. She immediately figured out what I was doing and told me it was the first time anyone had written a melody to fit with this exercise.

Of course, since I was prepared, the rule applied and we didn’t get to it in that class. But maybe next time. Today’s link is to an article written by Bono: What I Learned From Sargent Shriver – NYTimes.com

In case you haven’t noticed Sargent Shriver died. He was instrumental in the making of the Peace Corps and Lyndon Johnson’s “War on Poverty.”

I liked this quote in his obituary:

Break mirrors, Mr. Shriver advised graduating students at Yale in 1994. ‘Yes, indeed,’ he said. ‘Shatter the glass. In our society that is so self-absorbed, begin to look less at yourself and more at each other. Learn more about the face of your neighbor and less about your own.’

But what caught my eye in Bono’s article was the fact that he quoted Sebastian Temple’s goofy rendition of the lovely Prayer of St. Francis. 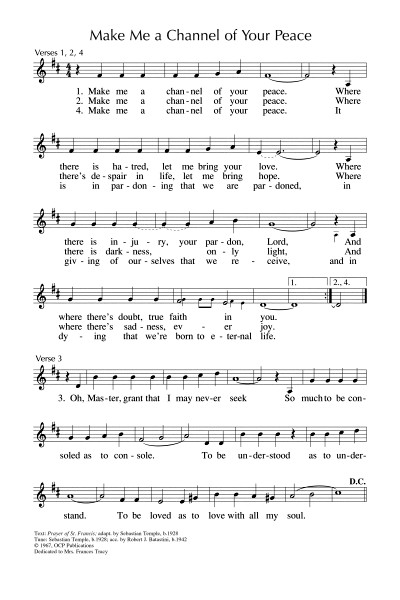 Bono mentions Shriver singing this song as a good Catholic. Yikes! I have led congregations in this song many times. It is indeed beloved. I like to think it’s because of the words not because of the inane melody by Sebastian Temple. (I think it’s goofy whether Sinead O’Connor, the choir of Westminster Abbey or Susan Boyle sing it.)

I remember listening to Sebastian Temple’s rendition of it when I first started playing it. He did it in sort of a goofy calypso.

As I read Bono’s description of how Sargent Shriver and his wife mentored him and Shriver’s son as they developed international charity programs,

I couldn’t help but wonder if Sebastian Temple would have gotten a thrill out of Bono mentioning his song.

One thought on “jupe on the ballet dance floor, egad!”