Spent a little over five hours yesterday afternoon finishing up my first draft of possible choral anthems for the entire upcoming season. I finished off with Pentecost 2013. When I looked up from the computer I felt more dazed than triumphant.

For each Sunday and high Holy Day I chose from around five to ten possible anthems. My plan is to now straighten the choir room and file several years worth of choral music.  Having my hands on the music and physically being in the room seems to always lead to a few more ideas of material to use.

I also found time for a good chunk of working on the Stanford organ piece I am going to perform Sunday. During the Wednesday Eucharist I vacated the organ bench so as to not disturb the worshipers since the chapel sits right under the organ pipes. I used this time to file anthems in the choir room. A visit to the farmer’s market brought fresh tomatoes, peaches, chevre and corn.

I was just a busy little beaver yesterday.

After finishing the choral music task, I treadmilled. As Eileen was getting home I was breaking out the grill to cook up the last of the brauts she bought on vacation along with a generous helping of veggies (carrots, potatoes, onions and poblano peppers).

This morning I was reading about the hymns from the great eccentric English poet, Christopher Smart. He has always been a favorite of mine ever since reading his poem, “For I will consider my cat Jeoffry.”

I own a beautiful two volume set of his works published by Oxford. I remember purchasing them at a college library sale in Flint, Michigan. Apparently they have been superseded by a later edition. I remember wondering why a library would be discarding such beautiful books by a great poet. The later edition dates from 1983 which is much later than I purchased the books so they were not  discarding them for that new edition. Hopefully they were duplicates.

I don’t think the Brit J. R. Watson factors in the American Hymnal 1982 when he writes about the use of Smart’s poems as hymns to be sung in worship. He says that a scant one or two of them were included in hymnals. I count six of them in the Hymnal 1982. A little reading shows me that one of the people who helped with the American collection (F. Bland Tucker) was a Smart aficionado and cobbled together at least one new hymn from Smart’s work. I haven’t gone through all six of the hymns in Hymnal 1982 yet but will probably do so.

I recognize the writer of this article, David Stockman, as an influential member of Reagan’s economic team who fell splendidly out of favor when he was quoted at length in an article in the Atlantic. I like his notion that a realistic reform of the “welfare state would require a sweeping, income-based eligibility test, which would reduce or eliminate social insurance benefits for millions of affluent retirees.”

And of course he doesn’t hesitate to point out the inconsistency of Rep Ryan’s voting record on fiscal issues. 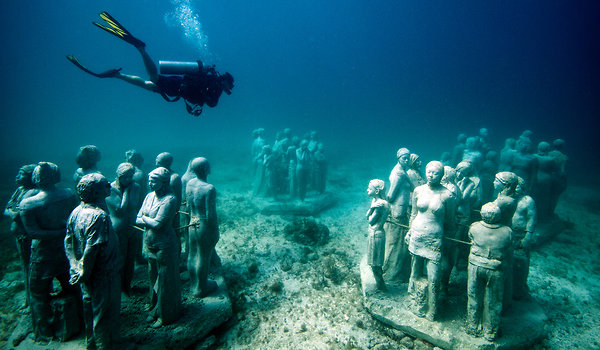 In Cancún, Trying to Protect Reef With Underwater Statues – NYTimes.com

This is an amazing example of contemporary art. More info and pics of  Jason deCaires Taylor’s work at his website: http://www.underwatersculpture.com/index.asp