I have just finished kneading basic sweet roll dough (Recipe from Betty Crocker). I am planning to attempt cinnamon rolls this morning. This is brave of me, because my mother-in-law, Dorothy, makes what have to be some of the world’s best. I will settle for decent. Actually, it’s hard to make BAD yeast based cinnamon rolls. Heh.

I have had some interesting cases of “overlapping” stuff, not to say synchronicity, this week.

I discovered that Rosen’s chapter on Mendelssohn in the wonderful book, “The Romantic Generation” is entitle “Mendelssohn and the Invention of Religious Kitsch.” Ouch. I have read about half of this book but had not reached this chapter.

It could easily be that I myself admire things that Rosen (and other worthy bright types) would label “kitsch.” I remember discussing the French Baroque style with my deceased teacher, Ray Ferguson. He commented that if the music were superficial he still had no trouble admiring and advocating it. I admire HIM for such an attitude.

“Kitsch” seems to be German for “worthless.” 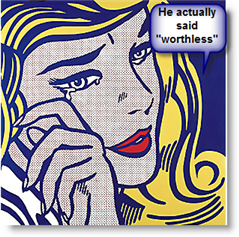 It is often used in the phrase “Religious Kistch” (as Rosen does). This makes sense. If we soften the word to mean “bad taste” (whatever that actually means), it does seem like an inordinate amount of U.S. religion embraces it on a whole scale basis. and ran across this:

Of course Scruton is wrestling with a philosophical take on just what beauty actually is. I’m interested in that. That’s why I’m reading his book.

Rosen seems to contrast Mendelssohn’s graceful composition with the nobility of the work of his (Mendelssohn’s) hero, Beethoven. I would like to think I am attracted to the sheer grace and sweep of Mendelssohn’s musical ideas. I know that, in truth, I find his music attractively playful and fun to play and listen to. Oops.

In his New Yorker article, “Top of the Pops: Did Any Warhol change everything?” (which unfortunately is not online. bah.), Louis Menard quotes the dubious art critic, Arthur Danto:

Avant-garde artists were compelled to make nonrepresentational paintings, he [Danto] argued, because of the mass production of commercially manufactured culture–kitsch. Kitsch–popular fiction, Hollywood movies, and so on–was realistic, and its subject was the satisfactions of middle-class life under consumer capitalism.

So, here I was reading in a different place about “kistch.” Now defined by Danto and quoted by Menand  to mean “commercially manufactured culture.” Interesting.

I myself have noticed my prejudice against that which is designed primarily to be consumed–pop music, fiction, movies. Of course not all of these are made with the primary purpose of sales, but it seems pretty easy for me to figure out that many of them strike me that way.

So. Is the music I perform and write kitsch? Oy. It is possible. Nevertheless this does not diminish my enjoyment of it. Much.

We are performing a short movement from Mendelssohn’s Elijah on Sunday. I am planning to perform an organ prelude by Virgil Thomson and postlude by Mendelssohn.  This music which might be Rosen’s kitsch will probably elevate the tone of the worship a millimeter. Heh. At least I hope so.

My final overlap is that last night I read about sixty pages in one of the books I inter-library loaned. You will notice the author. Menand is also the guy who wrote the article on Warhol. Cool. Overlap.

This book by the way has totally sucked me in. Menand is looking to write about the ideas of several people (Oliver Wendell Holmes, William James, Charles S. Peirce, and John Dewey). He believes that their ideas in the wake of the post-Civil War changed and shaped America.

Specifically he seems to think they turned away from certitude and ideology with the conviction that certitude leads to violence. In its stead, they sought a middle ground of examination of self and ideas that led them to their various conclusions and philosophies and lives.

Holmes is the first he writes about. He goes from idealist, to disillusioned wounded soldier to the great Supreme Court Justice he became. Good stuff. And easy applicable to America today.