I’m must be feeling a bit tired and cynical this morning because it occurs to me that one can see much of the history of the United States as a continuous stream of perfidy. Since we do not trace ourselves to the people who lived here when Europeans arrived (the Native Americans), we are a complete nation of immigrants. Plus we coerced people from Africa to come and be less than human among us, to serve us and to do our work for us in the fields and our houses.

Succumbing temporarily to Lincoln’s “better angels,” we “freed” them to be third class citizens. You can probably fill in the history from here. It has been lately rehearsed in the public discussion.

So, the recent actions of this country to keep out people who seek entry can seem like a continuation of the terrible things we have done to ourselves throughout our history. 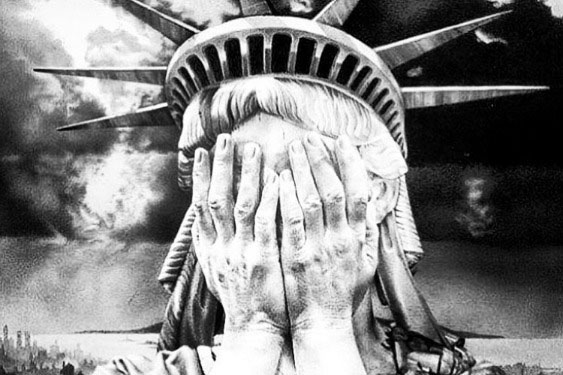 I am aware that this is a cynical stance and it does not completely describe the situation by any means. But I have had an aversion all my life of identifying with a “country.” I love many things about the United States. But I’m not sure I love it. I’m not sure it is actually something that can be loved. It reminds me of the corporation syndrome in our elections. Corporations are now people. I guess in the view of many, the United States is reified into a person. Is this person an angry uneducated white man? It kind of seems like it right now if you buy that approach.

I guess I’m sorting it out from ideas like “society” and “community,” both of which make sense to me. But I keep thinking about the image of selfish immigrants who repress, exploit, and keep at the border people like themselves.

I’m also wondering this morning if this temporary stay of the executive order about immigration will allow the Sudanesen family we were expecting here in Holland to now come. To quote from my boss’s sermon last week:

“The Garang family is a family of five.  Grandmother, Tabitha, Mother, Awak. They are an 18-year old boy, Deng, 16-year old girl, Abuk and 7-year old boy Ajang.  They also have numbers on the printouts we’ve received.  In the system they are known as “Aliens Numbers 212-895-605 through 609”. They have numbers.  They are people. They are Sudanese refugees. They have lived in a camp in Kenya for years and years and years and they have been participating in a very thorough and unsettling resettlement process for a very long time. And they have names.”