[Warning: another long self obsessed blog post from jupe with 2 many dang wirds]

Lately I’ve been pondering my own ideas about how human relationships work. I think they are based on blood ties,  common interests, and/or history.  I know I have some pretty strong convictions about how I think relationships work. These convictions say a lot about who I have been and who I am now and at best are but a body part of the elephant in the room: the complexity of human interaction.

I think relationships work best with good feedback. I think this feedback is most effective in person and live. When I am talking to someone, I am very aware of the entire person, not just the words they are saying (or not saying). This kind of interaction is so intuitive it defies my own attempts at analyzing. But nevertheless I do think about this and also realize that my perception of who other people are include presence and history in a very deep way.

This presence (and often the history) can be lost in communication without emotion such as email or exchanges on the internet.  Writing email or communicating on the internet is so tricky these days because it often involves quick casual comments. These comments are framed by our emotion of the moment. These are so obvious to us, we often don’t realize how important they are to what we are saying.  What we mean would be much more obvious to the person we are addressing if they were in the same room with smelling us and tasting our moods and multiple quick reactions.

This extra information is often pointed to as the most of our communication to each other, much more than the words of our spoken or written language. That’s why written language continues to be such an art.

Good web designers of many ilks often say to themselves and others, when you communicate on the web: Talk like a person!

I take this to mean that if we avoid the false objectivity of academic parrot talk and lapse into our normal everyday speech we are much more likely to be understood.

Of course good writing for me involves clarity and simplicity.

This brings me to my next  idea about relationships and communication.  Even the meanings of words themselves change over time. And we as people constantly evolve and change sometimes into very different people from whom we have been. I think of my own father in the throes of his devolving personality due to the illness that killed him (Lewy Body Dementia).

I now believe that the normal metamorphosis of personality that inevitably occurs in each of us was sped up in my Dad’s disease. He memorably said at one point, “This is not who I am!”

I took this to mean that the personality that he had was much diminished from the complex series of people who he was over his life.  Sadly, in a way during his disease it was both who he was and who was not.

I am thinking of a friend I knew in college years ago.  We were musicians together and he taught me some guitar licks. We were casual friends. Now we are both on Facebook.  He is very political and unhappy about Obama and dang Democrats. I voted for Obama and continue to see him as doing a good job of leading at in impossible time  in our country.

So in this time of partisan stereotype, my old friend and I are on opposite sides of many moral and public questions.  Within the last few days I linked in on Facebook an article by Bob Herbert  called “Misery With Plenty of Company.” I understand its basic premise to be that the poor in our country while exploding as a demographic command no advocate in the political and governmental leadership.

The article is from the New York Times which is stereotyped as “liberal” as opposed to the Wall Street Journal which is stereotyped as “right wing.” It seems that these days are times of choosing one “side” or the other. I think it’s a lot more complicated (and interesting) than that. I have many “friends” on Facebook as well as in the “meat” world who I am pretty sure would not agree with my values. But I sort of like that. Exchanging ideas and opinions can be illuminating. I try to be civil when I engage occasionally in this ongoing exchange of ideas. 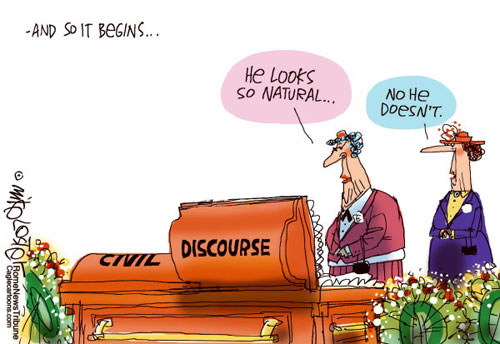 Anyway my friend “commented” in a way that made it obvious he disagreed with the premise I got from the article and said something about how easy it is to sell that vilifying the rich benefits the poor.

I “commented” back that I understood the article the way I describe above. But I also remember this man as having a sense of humor. When I was with him I experienced an interesting mixture of intelligence, sardonic humor and sadness. In my comment I tried to do a bit of humor in this way:

The point of the article is that there are no politicians who situating themselves as advocates of the poor. As far as vilifying rich people, I think of myself as rich, indeed, very lucky to live in the U.S. and have enough to eat and a place to sleep and an instrument to play and books to read and music to listen to. Okay the last few are silly.

Interestingly my friend respond with an emoticon that seemed to make a silly face.

I describe this at length to illustrate how the history of our relationship and talking like a person made our communication more human and less reactionary even though we disagree.

I can see I’m rambling on, but before I stop I want to be sure and talk about two more ideas.

First,  as a parent I have experienced the internalization of my personality in my children. This internalized parent (which I believe we all have to some extent) is a distinct person from myself. In fact I can remember the frustration of witnessing the conversation between my children’s internalized parent(me)  and themselves and not being able to get into the conversation, shut out by my own fixed personality as understood and captured in the heads of my kids.

This speaks to a couple of my ideas. First that how we perceive others is primary in our understanding of who they are. And secondly that we are all moving targets. And in each case, if we don’t have the continual feedback of physical presence we are even worse at understanding each other.

All this is a way of saying that I think that the internet is wonderful but it is only a supplement to actually being there.

Lastly, I think that trust is a basic element of relationship. I have difficulty trusting others. But I work at it. If you are my family, you are innocent (several times over) until proven guilty. If you are a colleague I assume you are competent, well informed and well meaning until I catch you out in a misrepresentation or lack of ability you claim to have. I know that I put a lot of words into today’s blog.  But it’s just a portion of my understanding of this part of being a human.  Something that I keep thinking about and refining my understanding and actions around. Woo hoo!

2 thoughts on “human relationships and the internet”