I like to read Donald Hall’s “Kicking the Leaves” around this time of year:

This year the poems came back, when the leaves fell.
Kicking the leaves, I heard the leaves tell stories,
remembering and therefore looking ahead, and building
the house of dying. I looked up into the maples
and found them, the vowels of bright desire.
I thought they had gone forever

That’s just a bit of it. I remember first hearing him read it on the radio. It doesn’t seem to be quite as good as I remember it. But whothehell, toujours gai, archie, toujours gai.

I woke  up thing about the notion of Invisible people. 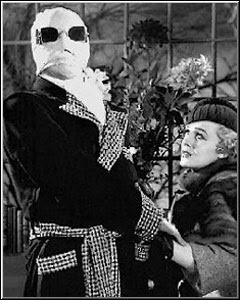 In 1911, G. K. Chesterton published a Father Brown short story called “The Invisible Man.” It uses the same notion as Ellison’s novel of the same name, the murderer is invisible because people just look past him (he is a postman). In 1897, H. G. Wells wrote the famous sci fi novel, “The Invisible Man.” In 1989, Roger Taylor wrote a song for Queen with the same title. It is closer to Ellison/Chesterton’s use of invisible:

I love the joy stick in the video. Those things were so phallic.

I guess I relate to the invisibleness of people who are not seen by the people around them. In my environs people certainly notice me (I look a bit different than most Hollanders on the street). But at the same time I don’t think many people understand me or my work. whippy skippy.

Life is still pretty good for this aging musician. I was looking at this passage in Barack Obama’s “The Audacity of Hope” this morning:

When Democrats rush up to me at events and insist that we live in the worst of political times, that a creeping fascism is closing its grip around our throats, I may mention the internment of Japanese Americans under fdr, the Alien and Sedition Acts under John Adams, or a hundred years of lynching under several dozen administrations as having been possibly worse, and suggest we all take a deep breath. When people at dinner parties ask me how I can possibly operate in the current political environment, with all the negative campaigning and personal attacks, I may mention Nelson Mandela, Aleksandr Solzhenitsyn, or some guy in a Chinese or Egyptian prison somewhere. In truth, being called names is not such a bad deal. p. 22-23

In truth, neither is the way people treat me in Holland. Again whippy skippy. It’s hard not to feel pretty good that the man who wrote those words is now getting ready to assume the leadership of our country. Good luck to him and us.