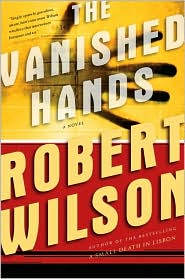 Finished reading “The Vanished Hands” by Robert Wilson last night. I checked out two more of his novels from the library: The Blind Man of Seville and A Small Death in Lison….

“The Vanished Hands”  is sort of a Spanish police procedural murder mystery and has a pretty interesting if outlandish plot. I enjoyed it very much as escape reading and decided to read a couple more by this guy.

I had a chance to chat with my bud, Jonathon Fegel yesterday. That was good for me. I have been getting my groove back a bit (although it feels like its waning this morning). I have scheduled a movement of Hugo Distler’s organ trio for the prelude a week from Sunday and have been rehearsing it daily. Jonathon and I spent some time writing down an instrumental piece he is writng yesterday. I am beginning to think about a set list for my March 13th gig. Started my first high school musical pit orchestra rehearsal last evening in Grand Haven. I am hoping they will be able to honor their promise to pay me half of my fee half-way through the rehearsals. I have told the director that if I do not receive a check at that point, I will no longer be available.

It turns out that the reason I was paid months and months after my service to them last year was a power hungry accoutant who thought I was getting paid too much for my work. Don’t that just figure. It’s not like I charge top dollar. Actually I don’t charge at all, they set the fee they are willing to pay. Bah.

Anyway, the rehearsal went fine last night. It was an interesting challenge to go in and sight read the score. The biggest challenge was reading the notes in the typically fuzzy musical hand written score. I enjoyed driving home in the dark looking at the full moon in a clear sky listening to Chumbawumba.

Today I am seriously considering lugging my electric piano over to Boersma Cottage and playing a bit of music for the elders and the shabazeem.

The frustrating bits of yesterday were largely around trying to help but not piss people off by offering my comments on the church web site. I am pretty convinced that the people involved with this don’t use the net very much. Hence it’s like speaking a different language to try to make suggestions to them. And of course they are put off by my whole persona anyway. Sheesh.

Also this morning I clicked on an email from Semco telling me (once again) they have (ta da!) upgraded their website. The last time they did this was December of last year. I was locked out and had to phone them. This morning I tried to log on with the proper logon and password and  (ta da!) I was instantly locked out and blandly advised to call a service rep. Of course the office doesn’t open for another hour. Sheesh.

Oh well, I just hope I can find a bit of that old groove today despite people’s silliness. Help me, Lord.