After two days of time free of appointments, I plunge into two days of activities today. I have church stuff all day. I meet with the boss and the children’s choir director (who is also performing in my gig this week) today. Also there is a joint meeting of the Pastoral Council and the Worship Committee. This evening is a rehearsal with all players (hopefully) for tomorrow night. Tomorrow I have a morning meeting with my boss, an afternoon rehearsal with the trio and an evening performance. Right now everything looks pretty good for all this stuff. I have been spending the necessary time with piano part of the Mendelssohn trio to do everything I can to be prepared for tomorrow night. Also rehearsing my other parts (mostly playing and singing) as well. I am planning on working on the Mendelssohn this morning before my meeting. I also went over saxophone parts and re-issued what I hope are parts adjusted to reflect the ranges of the alto and tenor saxophone. If I have time I want to go over the rest of these parts before this evening.

In the meantime I have been reading. 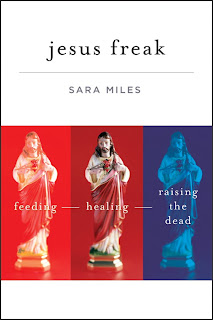 This is the assigned reading for today’s combined Church committee meetings. I’m not quite done with it, but I think I have the  gist of the book. Sara Miles is a writer of clear prose that has discovered  radical Christianity late in life. This is her second book about her experience.

I’m sort of enjoying it but would never read it unless assigned to do so.  I am conscientiously marking passages I think might be pertinent to my community’s understanding of radical Christianity.  I’m a bit leery of just how far idealism will drag us in.  My church has established a once a month food distribution. Sara Mile’s first book, Take this Bread, probably helped with this.

But at my last meeting with my boss, I rehearsed a litany of how our worship still falls short of serving this community in this time and this place. Stuff like body posture in worship, parsimonious distribution of Eucharist, and other perfunctory mistakes that take us further from being real together. I know it breaks her heart. But she is in the driver’s seat and wisely moves slowly. Sometimes it’s so slow that I have to adjust my attitude in order to be constructive. That’s what I told her last week. I have had an attitude adjustment. We’ll see how effective it has been after today’s two meetings. Ahem.

This is Nussbaum’s latest. I interlibrary-loaned it. I read the first chapter last night. She is a philosopher I have read in the past.

I went and pulled this off the shelf and discovered I quit reading about half way through. I do that sometimes.

Basically Nussbaum advocates the thoroughly educated, critical thinking citizen as basic to the function of democracy and the living of life in general. I couldn’t agree more. She teaches at the University of Chicago.

I have been reading in my Classics of Western Spirituality edition of selected writings of St. John of the Cross. I have read several books in this series including the one by and about George Herbert and the one on Quaker Spirituality.

Somehow my spiritual side has become more obviously active lately. I think that as an artist (musician, poet, whatever) I am never far from this stuff. Sometimes the many forms brain-dead Christianity takes leads to me to renounce Christianity and faith in God just to clear my own thinking of the garbage in the public discourse.

But I have never renounced the basic radical stuff. In fact it is constituent to my understanding of myself.

I have been drawn back to San Juan de la Cruz and Thomas Merton because I have been wondering about the “dark night of the soul” as a path to meaning in life. Specifically my own life.

This leads me to my last book for the day.

Christopher Hitchens is one of several public atheist types that attract me. I’m attracted to them through the lens of the madness of being alive at this time in history and also the lens of writers I have read and learned from like Merton, Nietzsche and Kierkegaard.

This is Hitchen’s autobiography and so far I love the prose and the stories. His politics is one I sometimes find reactionary but still interesting. Any friend and colleague of  the late Edward Said and Martin Amis can’t be all bad.

I do find that many English writers seem to be more erudite and literate than American writers. This attracts me.