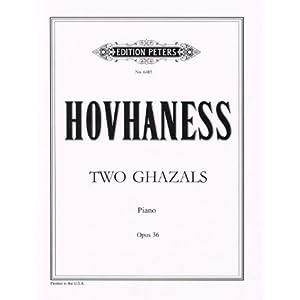 ghazal or ghasel (also spelt gazal, ghazel), a short lyric poem written in couplets using a single rhyme (aa, ba, ca, da etc.), sometimes mentioning the poet’s name in the last couplet. The ghazal is an important lyric form in Arabic, Persian, Turkish, and Urdu poetry, often providing the basis for popular love songs. Its usual subject?matter is amatory, although it has been adapted for religious, political, and other uses.

I recently stumbled upon two uses of ghazals. My cellist is quite in love with Hovhaness’s piano trio we have been rehearsing. I have some of his piano music as well and have done some of his other music including choral pieces. I interlibrary loaned several of his piano pieces. Yesterday I played through the ghazals and found them quite lovely. Ordered a copy online.

Coincidentally, I have been enjoying the poetry of Suzanne Gardinier. I read two books of her poetry before deciding I needed to have my own copies. I also ordered a third to read: Today:101 Ghazals to read. She uses the poetic form of couplets and a repeated phrase ending each couplet.

Hovhaness replicates this musically by using a phrase over and over as accompaniment to melody. His Two Ghazals are to be treated like a bouree or minuet dance movement repeating the first Ghazal after playing the second.

I am thinking they would make lovely piano preludes at church.

Yesterday I played a wedding. In doing weddings I often brush up against people and their experience of event and music in interesting ways. Yesterday our little church was packed. Energy (and the subsequent noise) was so high that you could barely hear my Debussy and Bach piano pieces I played for the prelude. I switched to organ and played my postlude for today’s service (“Postlude” by William Mathias) which is a cheerful little thing. The crowd noise increased so I just quit playing. Pastor Jen went to the front of the church to greet people, let them know we were about to begin and invite them to take part in the service especially in the singing.

The couple had chosen extremely predictable music for walking in and out. I began Pachelbel’s Canon in D as the noise began to resume from the high energy crowd. It subsided a bit as the parents of the couple were escorted in and then the bridesmaids and bridegrooms. The bride herself held back until I began playing the Wagner “Here comes the bride.” 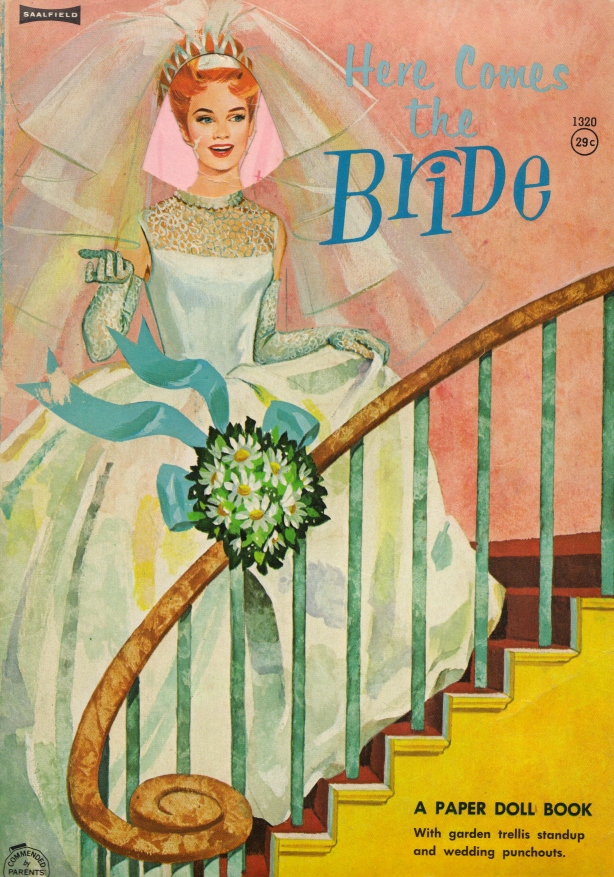 Interestingly (at least to me), the congregation was not much of a singing group. I began the hymn, “Joyful, joyful,” with a pretty strong organ registration. Since the singing was tepid I cut back in volume a bit to let the group find its voice (something I routinely do). The singing improved slightly but was still in contrast to the high energy and positive vibes that were obviously in the room. Afterwards,  Pastor Jen and I were musing on the singing.  I don’t think it was a conscious decision on the group’s part to not sing. As I told Jen, I just think people are out of the habit of making their own music. It’s too bad, I guess. But we got the couple married off  anyway, of course.

John Updike uses this word in his novel, A Month of Sundays. Updike sucks me in as a reader not only because he tells interesting stories but he obviously loves words.

I finished reading this novel yesterday. It’s told in the voice of an Episcopalian priest who is spending a month in the desert recuperating from bad behavior with golf, afternoon drinks and daily writing of each chapter of the book as a kind of therapy. Today we would probably send him to a sex addict rehab center.

He is both pathetic and engaging as Updike tells the story in his voice. At the end of the book he is still acting inappropriately. Hilarious little tale.

I adore Fisher-Dieskau’s recordings of Schubert and Schuman lieder.