Skipped a couple of days of blogging. I guess I’ve been busy.

I spoke with my boss the priest yesterday about giving up my predilection to match choral anthems with the readings. (that’s me on the couch) This seems like a whole lot of effort when in fact my higher goal right now is to keep the choir sounding good via attention to vocal coaching.

The reason this is on my mind is that we are experimenting with one-stop-shopping for choir members: all rehearsals and performances on Sunday morning.

I say we are experimenting but I’m pretty sure there will be no turning back from this adaptation to where people put their choir commitment in their lives.

I had two new members Sunday and one very pissed old member. This is not a bad average.

My boss forgot to underline the bulletin announcement about seasonal choirs. There was so much going that day.  I don’t like adding announcements when there are already so many anyway. I think people quit listening. Anyway, she is thinking of mentioning it this Sunday.  I don’t think the congregation is at all aware of this option. But communicating to church members is pretty complicated these days because people drift in and out so often. People who think of themselves as members often are not present.

This means rethinking communications strategies and getting more sophisticated about web sites and such.

Which my group doesn’t seem to be into…. so fuck it.

I’m feeling goofy because I am getting sucked into church stuff via trying to do liturgical music well again. Oy. I need less church and more music. Which is my strategy. But I hate to give up cleverly chosen anthems that connect to the readings of the day. But so be it. In the meantime I am working hard on organ music. This Sunday I’m doing two pieces by Krebs.

He was a student of Bach. The silly saying is that Krebs (which is German for “crab”) was the best “crab” in the “brook” (Bach means “brook” in German).

It’s interesting to me that Krebs lived until 1780, which means he was composing at the same time as Mozart and Haydn. And where as his compositions do show the “gallant” influence of the classical period, one can easily see Bach’s influence in his writing. I find Krebs compositions quite lovely and interesting.  I played his oboe/organ fantasy (I think it’s a fantasy) on one of my Master’s recitals.

I’m also working on William Bolcom’s chorale prelude on “Sometimes I feel like a motherless child.” This little composition is cool but is sort of a motherfucker to learn. I have been working on it most of the summer. The difficulty is two-fold: a pedal part that emulates a good solid Motown bass line (the piece is dedicated to Marvin Gaye) and a bewildering array of complex chords in Eb minor. But it’s coming along. 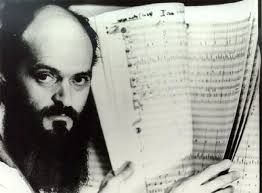 Composed on commission for the 1989 Organ Festival in Parainen, Finland, Mein Weg hat Gipfel und Wellentäler is one of only a handful of compositions for organ by Arvo Pärt. It takes its inspiration from a poem fromEdmond Jabès Livre des Questions, particularly a line that provides the title: “My path has its peaks and its valleys…” The poem compares the ups and downs of living with the rise and fall of the ocean’s waves, a topic that no doubt resonated closely with the composers deep religious convictions.