I originally began yesterdays blog post with the idea of pointing out some interesting pairings of non-American stuff in my day on Thursday of last week. Then I bogged down into Zuckermann’s theory of how we pay attention to the world which definitely relates to experiencing a wide range of cultures.

Thursday evening in a new spirit of economic thriftiness (Eileen is on the verge of quitting her job and reducing our income significantly for our retirement), we skipped the expensive CitiVu were we often have our date night and went to our favorite local Mexican restaurant, Margaritas which is not only excellent food but modestly priced.

I discovered this wonderful dish a few years ago on Margartias Menu. It is a thick corn tortilla with the topping of your choice. On top of this are refried beans, lettuce, onions, salsa, and on very top acified cream.  The first time I ordered it with veggie fajitas instead of meat, the waitress said she had never heard of this variation but that it sounded good.

Eileen had a small taco salad.

Then we drove to the concert we had planned to attend of Chicago Afro Latin Jazz Ensemble.

It was a nice pairing of cuisine and music.

Earlier in the day, I had finally listened to a CD that weirdly was in a box of Kitchens of India food. 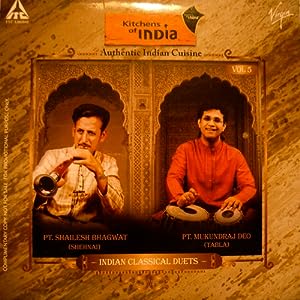 The boxed fast food had been sitting on my shelves for quite a while because it’s not very good. I recently ate it anyway when I had some left over rice to go with it.

I put the CD in my player in my car to sample it. I was blown away. The music was wonderful.

On Thursday I found myself reading and listening to this CD. The book I was reading is volume 2 of J.G. Farrell’s Empire Trilogy, The Siege of Krishnapur.

Farrell has written a bitter satire on the demise of the empire of Great Britain.

The first volume is Troubles which describes a returning WWI British soldier’s experiences of the “troubles” in Ireland in the first part of the 20th century. 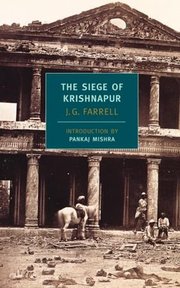 The second volume, The Siege of Krishnapur is a description of the death throes of the East India Company’s hold on India in the 19th century. It rhymes nicely with the stupidity exhibited in the first story of the Troubles.

The beautiful strains of Indian music on my fast food free CD wafted through the room while I was reading this book Thursday.

Also it’s apt to read about the demise of the British Empire at a time when America is insanely plunging into the future of less and less international influence.

By the end of the evening of I was tickled when the trumpet player and leader of CALJE was working the crowd and yelled out,  “Anybody speak Spanish out there? Hey this is America, of course there are Spanish speakers here.” I see hope in that.

2 thoughts on “food and other cultures on Thursday”