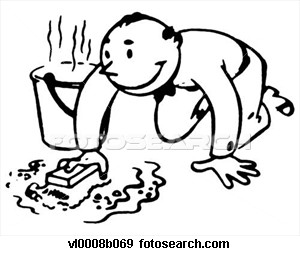 Got down on my hands and knees and scrubbed my kitchen floor yesterday for about two hours. Surprisingly I’m not as sore as I thought I would be this morning. I think this might have something to do with exercising more.

I love this from a morning link:

“MANCHESTER, N.H. — Minnesota Rep. Michele Bachmann’s visit to the first-in-the-nation primary state of New Hampshire got off to a rocky start on Saturday morning when she misstated a key fact about the American Revolution in a speech to a group of local conservative activists and students.

“What I love about New Hampshire and what we have in common is our extreme love for liberty,” the potential GOP presidential candidate said. “You’re the state where the shot was heard around the world in Lexington and Concord. And you put a marker in the ground and paid with the blood of your ancestors the very first price that had to be paid to make this the most magnificent nation that has ever arisen in the annals of man in 5,000 years of recorded history.”

In fact, the 1775 Battles of Lexington and Concord that marked the first military engagements of the American Revolution took place in Massachusetts.

I love this country!

I did manage to get some practicing in yesterday. I am performing a chorale prelude by Charles Hubert Hastings Parry, this morning at church. His music is in the English Romantic Pastoral style.

It’s based on the melody, ROCKINGHAM. We are singing the hymn, “My God, thy table now is spread,” at communion today which uses this tune.

The postlude is by Jan Bender.

He was a student of my hero, Hugo Distler. Bender writes in an angular coherent dissonant style.

It’s based on ERHALT UNS, the melody of the closing hymn, “The glory of these forty days.”

In the meantime here are a bunch of links to articles I have bookmarked and will hopefully check out more thoroughly at some point:

“A Dangerous Congressional Overreach on Net Neutrality” by Megan Tady

“A Tea Party Hit on Net Neutrality” by Nancy Scola

A campus in transition, Progressive, conservative views clash at CMU By Benjamin Jenkins

This last article is my nephew. He makes me proud!