I think I might have bitten more than I should have in tomorrow’s scheduled organ prelude.  I thought I had performed the first movement of the C minor Organ Trio of Bach before. But I’m beginning to think this is not true. Mostly I am having second thoughts about tempo. The movement is marked Vivace in my edition. The word means “lively.” I am afraid however I can’t really play it too fast yet.

I like the way I play it.  It feels lively to me. I have decided even if my tempo is incorrect, tomorrow I am still going to play it at a slower tempo than the recordings I have listened to (briefly at this stage of learning).  I will have more of a chance of playing it musically (always the goal).

And of course tomorrow the new bishop is presiding at our church.

Why do I put myself through this stuff?

The answer is that I still at the old age of 62 have a need to challenge myself especially in the service of beauty.

A quick look at Donington’s The Interpretation of Early Music (which is largely an anthology of quotes) reveals that Leopold Mozart (Amadeus’s dad) puts Vivace in between Moderato and Allegretto.

VIVACE means lively, and SPIRITOSO says that we should play with intelligence and spirit, and ANIMOSO is almost the same. All three kinds stand midway between fast and slow, as to which piece of music bearing these must itself show us more

So there you have that.

When I perform at a slower tempo than other players I am reminded of Bob Hobby’s observation about his teacher Don Busarow. Busarow was notorious for performing slowly.  His students maintained that there was Adiagio, Largo and then Busaro.

Speaking of challenges, my colleague Rhonda Edgington has asked me to learn a duet part for “Rhapsody for Organ Duo” by Naji Hakim. 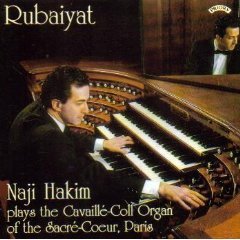 I do admire the way Rhonda is interested in so many different composers. I have never heard of this dude. The piece will be a challenge for me. I ordered the music in late September, but it’s not scheduled to leave the warehouse of Sheet Music Plus for four to six weeks. When I see that, I figure they have to get it themselves from the publisher. If I had been clever I would have ordered directly from the publisher.

Instead, Rhonda loaned me her copy. I will (illegally) photocopy it to begin learning right away. I don’t think the concert is scheduled until Advent.

This morning (and yesterday) I played some Czerny virtuoso finger exercises. I sometimes keenly feel my lack of keyboard technique. I persist in playing scales and Hanon. I read a story once about Oscar Peterson.  Some interviewer was leaving Peterson’s apartment after interviewing him. After he closed the door, he heard Peterson begin in on Hanon exercises. I find this inspiring since Peterson’s piano technique was huge.