I have been escaping by reading O Jerusalem by Laurie R. King.

Sherlock Holmes and his new side kick, Mary Russell, are sent by Mycroft Holmes to the Mid-east around 1919 to solve a mystery.

I wish that Micheal Chabon had written his current New York Times Magazine novel serial, Gentlemen of the Road, more in Laurie R. King’s readable style. I have actually given up on the Chabon. He seem to be writing in a deliberately pretentious dense style. (Nice illustrations, though) 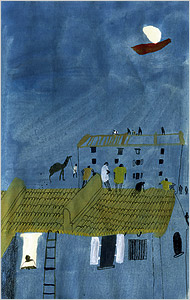 Here’s the first sentence from back in late Jan.
For numberless years a myna had astounded travelers to the caravansary with its ability to spew indecencies in 10 languages, and before the fight broke out everyone assumed the old blue-tongued devil on its perch by the fireplace was the one who maligned the giant African with such foulness and verve.

I gave it several weeks and finally found the style too much work. Hard to remember the plot from week to week when I’m shuffling through his prose.