Choir rehearsal was interesting last night. The mood was subdued. I had only about half the choir and several of these came and went. There’s a lot of sickness in the group. Maybe someone gave me what I have now (a bad cough and cold) or maybe I gave them my disease. I could tell that people were dealing with the election. At first I ignored this and let the singers immerse themselves in singing. I do a good deal of singing at every rehearsal. I try not to talk to too much or waste much time. However, I did respond when one singer mentioned the election and tried to joke a bit. (I told about one of my facebookless “friends” who posted that he had to go to gastroenterologist yesterday, the day after the election. On the form he had to feel out, there was a question if he had “sense of impending doom.”) This brought out laughter and some general discussion of the election. It was interesting to me that everyone in the room assumed that all there had voted for Hilary. While this is likely, with over 70 per cent of our voting community in Holland voting for Trump, it is also likely (certain in fact) we have members of our church who quietly voted for Trump. When I said to my group that they were assuming that I had not voted for Trump they did not seem find that funny. In fact, they were a bit hostile (“If I thought that was true…….). But hostility from singers is nothing new in my life.

It has been interesting to read commentary in the immediate aftermath of what looks like a disaster for our country.  I haven’t seen much that sheds too much light this soon after the shock. Pundits seem to be unable to cease navel gazing and clearly look around them at our country.  I watched Clinton and Obama make public statements yesterday. They, of course, emphasized a gracious transfer of power.

But there were demonstrations in several cities in our country last night. One pundit in an NPR broadcast put it clearly: around 50 % of possible voters (registered or just simple of age?) voted, half for each side. This means that roughly one fourth of them elected Trump or that three quarters of this group of us either voted for Hilary or did not vote at all.

I of course don’t have a clue what this will mean for us and the world. Trump has caught a lot of people off guard, while vindicating those who said that the polls were wrong. The polls were wrong but not that wrong. What was most wrong was the interpretation of a lot of the media including sources that I trust and rely on like the NYT. 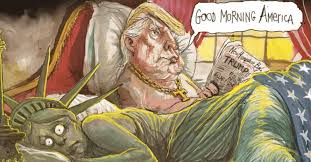 I try to step out of my echo chamber once in while usually not via TV but through trolling conservative web sites. There is an amazing amount of misinformation available from the absurd to the vaguely misleading. It’s very tricky to navigate.

What I’m doing in my head right now is mostly waiting for concrete actions and post election rhetoric on the part of Trump. Until then to paraphrase Brooks Gladstone I try to remember that history did not vilify Hitler for making speeches but for what he did.

In the meantime, this is an intriguing little recipe. I have copied the ingredients into my grocery list for future checking out at Meijer.