Finished a rough draft of “Ebb and Flow” yesterday. Despite the deadline I am still attempting to do some relaxing. Finished reading a mystery novel that is soon to be overdue from the library:

The choreographer quickly responded to my email last night. She is anxious of course to hear the piece and get a recording for rehearsals. Whew.

Today is Eileen’s and my 36th wedding anniversary.  Marrying her was one of the smartest things I ever did. I love living with her. Another review of this book, this time by Evgeny Morozov. He intelligently and gently challenges the weaknesses in Pariser’s argument.

“Unlike such human filters as critics and editors, algorithms do not “think” — they compute. And while computing the “is” (i.e., relevance) is something they can accomplish, computing the “ought” (i.e., our information duties as citizens) is a much more contentious and value-laden process that is also made impossible by the limitations of artificial intelligence.” 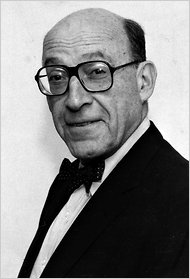 Another great obituary. Greenland was unconventional because he thought that advertising was at its best when it was honest.  Lots of great stories in the obit, including this one.

“One of Smith/Greenland’s most challenging campaigns was Penthouse magazine. In a bid to persuade skittish advertisers that people really did buy Penthouse for the articles, the agency prepared a series of ads, to appear in trade journals, that focused on the magazine’s investigative journalism.

One ad, which invoked an article in the magazine about the workings of the Ku Klux Klan, pictured two white-hooded figures.

The caption read, “Not everyone under a sheet in Penthouse is in the mood for love.”

BTW yesterday was another advertiser’s birthday, Dorothy L. Sayers.  According to the Writer’s Almanac site:

“She worked as an advertising copywriter from 1922 to 1931, and came up with the “zoo” series of Guinness ads, which have become classics. She’s also credited with coining the phrase, “It pays to advertise.”

One thought on “ebbing and flowing”