I tried to coast through yesterday in preparation for increasing flurries of activity as I prepare for the next year. It seemed to work. I feel rested and relaxed this morning.

I will choose organ music for Sunday today. I have been thinking of easing up a bit on myself here so that I have more time for other work tasks like writing recruitment invitations, choosing choral music and sorting and filing several years worth of anthems sitting around the choir room.

The weird and pleasant thing is that I enjoy all of these tasks (including of course preparing and performing organ music for each weekend). It’s just a matter of balancing my time and energy (“This is your energy pie.”) 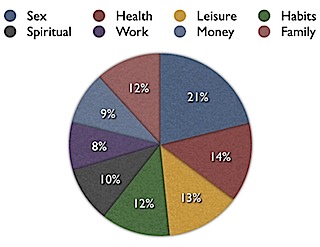 I have received my class assignment for this fall for ballet accompaniment. It is a bit lighter (for which I am thankful). 6.5 hours of classes a week is not too bad or at least it doesn’t seem like it at this point. My motivation for this work has changed to include a larger appreciation of the access to online resources I gain as staff. Since I actually use them pretty much daily (I have already done an author search this morning on Jstor), I am getting increasingly dependent on this perk. I have joked that if I lost my ballet accompaniment job I would try to get a menial job at Hope College just so I could continue to consult the OED and look up and read scholarly articles. I have always found it amusing when people apply some sort of literary purity standard to the use of hymns. The history tells us that hymns are always at the service of the community that sings them. They are constantly reworked to fit the group that is using them. Phrases are altered or omitted. Entire stanzas dropped due to being unfit for a particular theology.

All is forgiven when the little abbreviation “alt.” (altered)  is appended to the citation.

But this morning reading about the hymns of Charles Wesley I was struck by the absurdity of the modern notion of sole authorship and ownership of created texts. Wesley seems to have been an astute editor and transformer of what he absorbed from his own reading. He then used it in his hymns in a startling patchwork manner.

When I looked up his hymn, “O thou, who camest from above,” in the Hymnal 1982 Companion, there was at least one Biblical citation sometimes two for each one of the sixteen lines of the hymn.

Wesley like Bob Dylan took his world and rewrote it using the phrases and ideas that made up his intellectual world. There would be no Wesley without Milton, Pope, and the King James Bible as there would be no Dylan without folk music and newspaper articles.

Looked at like this much of the controversy about intellectual property seems pretty lame and self defeating to me.  How can someone insist on their sole ownership of a creation made up of the materials they have been given or stumbled across in their lives?

This is not to say that there is no such thing as creativity or authorship. Just that creativity relies on community and history not some sort of impossible magical alchemic process where something springs from nothing and has never been seen or thought of before. Put this up on Facebook.  German coverage on Russian stuff. In English.

Caught cheating. Good grief. I wonder if they have thought of a life of public service as an elected official. More on this long evolving story of theft of books. Once again a death inspires me to read an author. I admire this guy quite a bit but have only heard him on “This American Life.” Maybe I’ll read him too.

To provide that Members of Congress may not receive pay after October 1 of any fiscal year in which Congress has not approved a concurrent resolution on the budget and passed the regular appropriations bills. (H.R. 3643) – GovTrack.us

According to this site, this bill has a one per cent chance of passing. Sooprise.