Berkley Breathed is posting his new Bloom County episodes on Facebooger. I relate to this one and immediately reposted it on Facebooger.

Eileen says “they got Steve” since I have been posting lots of goofy stuff on Facebooger. It is in direct response to family members who seem to have bought racist, right-wing craziness hook, line and sinker. I no longer feel that I can directly respond to them since their language is one of pejorative and polemic and very little logic and is often a bit incoherent to me. So instead I mount a counter offensive of links and pics that are hopefully constructive and not quite as reactive as what bugs me.

The doctor said my health was doing okay yesterday. I had gained a few pounds, my cholesterol was up a bit and my blood pressure was still of concern but floating just under the alarming level.

What the doctor said specifically is my numbers and health were such that if I was doing all that I could to lower my blood pressure and cholesterol and weight it might be time for new meds. But we agreed that I still could work on my weight and continue my exercise for the time being and not take on a new drug.

At 63, this might be the best I can do. I do plan to try to lose the weight I gained this year.

I also stopped off at the house of the husband of a recently deceased woman whose funeral is this Saturday. I don’t normally do stuff like this, but the woman and her husband are long standing members of Grace and my boss and I agreed a little extra TLC was warranted.

We sat quietly on his porch talking after my doctor’s appointment. He is living at his house alone now I think, but has grown children living next door. I noticed that he was reading The Fellowship: The Literary Lives of the Inklings: J.R.R. Tolkien, C. S. Lewis, Owen Barfield, Charles Williams by Philip and Carol Zaleski. 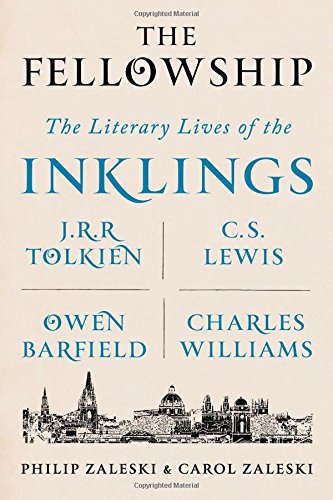 I believe my brother Mark mentioned this book as well or at least one on the same topic. Nicholas gets on a plane tomorrow to return to California. It has been fun having him around. I will miss him.

I was very inspired by seeing my brother’s book collection ensconced in his lovely shelves, spine out. My books have been in disarray for about three years and I miss them. I can usually (but not always) find a certain book, but it takes me for ever and I can’t browse as easily. I moved a book shelve from the porch to the living room recently to house the beginning of my music books. I started shelving them yesterday….