I broke my morning pattern a bit this morning and started a recipe to feed Eileen today.

The recipe is “Honey Glazed Spiced Pork Tenderloin” from Devin Alexander’s cookbook,  The Most Decadent Diet Ever. I substituted  Pork Shoulder Blade after a bit of research. I bought it on sale and when I froze it, I could tell it was very tender so it should work just fine.

I threw a couple of potatoes in the oven as well. My plan is to get all this done and ready for Eileen to take to work and heat up tonight.

I am booked through her meal break and won’t be able to bring her supper like I usually do. I will be meeting with student vocalists and going through their pieces for Solo and Ensemble. They are also performing these pieces at a recital next Wed evening.  I think the recital is a good idea. Each student seems to be preparing two pieces. Which means I have twenty accompaniments to prepare. I’m not complaining. I taped the photocopies together and went through about 3/4ths of them yesterday.  There is actually some pretty good music in the selection. Works by Menotti, Schubert, Strauss and Paul Bowles. I am looking forward to this.

After starting my recipe, I sat down to email the members of my piano trio.  We decided to read more of the Haydn piano trios before we settle on which ones we want to learn. Once we have decided, I will research a decent edition of them. I bought Peters editions of Mozart and Mendelssohn Piano Trios and have regretted it. They are dated. I’d like not to make the same mistake with Haydn.

My violinist has also promised to listen to recordings of the Bach violin sonatas and pick one for us to learn if I would email them to her. I thought I had recordings of these but I must have been thinking of the Mozart violin sonatas. So I purchased and downloaded a set of them and am emailing her the first one. Woo hoo! An excuse to buy Bach recordings.

Even though I tried to take yesterday morning off, I found myself pretty busy all day. 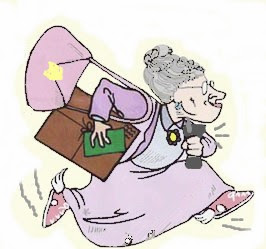 Ran some errands for my Mom (got her computer working again and a trip to the Dollar store for her),  and some errands for myself.  Then 2 & 1/2 hours of ballet class. Home to exercise for an hour or so.  The day was over. So I don’t have a ton of links even though I did read online for a while.

Weighing the Unknowns in Egypt – NYTimes.com

Milton Babbitt, Composer Who Gloried in Complexity, Dies at 94 – NYTimes.com

Obit of the influential complexity composer who wrote the article “Who Cares if You Listen?” Though influential, I’m afraid he represents an approach to composition that has never interested me all that much, namely the Schoenberg technique. This is an interesting web site which describes itself as

“Being a Hotch-pot of gallimaufry of divers things. to which there shall be posted a variety of links, pictures, tweets, videos and other kickshaws. By H. Rutherford author of that much admir’d blog, heraclitean fire, and of the photoblog Clouded Drab. Also including such Thoughts and observations which are to found to be too short for that esteemed organ; and not short enough for twitter.”

The picture above came from it.  A friend of mine emailed me a link to this website. Very cool!

I am seriously planning on purchasing Portis’s book. In the meantime I found this link to it online. I think the whole web site is suspicious. I downloaded it’s proprietary software and found AFTER I did so that there was a charge. I don’t see how they can charge for access to copyrighted material like Portis’s book and still be legal.