I revised the ending to Dead Man’s Pants (formerly Small Rain) yesterday. I thought it might be fun to post the changes. This piece is still not in finished form, but I think the re-write on this section is closer.

MP3 of revision of these measures
Pdf of same

This morning I listened to a dramatization of William Trevor’s short story “Sacred Statues” on BBC Radio 4.

The plot is that a talented but impoverished carver of beautiful wooden statues has come to the end of his tether with the fact that he cannot make a living at his art.

His strong willed pregnant wife convinces him to visit his English patron who has retired as a widow to Ireland where they all live. She has encouraged him by allowing him to live for free on her property in the next county. He bicycles 20 miles to ask her for more help. Unfortunately, she herself is falling on hard times and cannot.

His wife dreams up the notion that she will give her child to a local childless couple for enough money to live for a year while the wooden sculptor apprentices himself as a stone carver. There would then be a living in this after that for him and her and their two other children.

She approaches the wife of the childless couple. They are childhood friends. She outlines how to make two disappointments (childlessness and a failed artist) into two happy endings. The childless woman confesses to not having enough courage to pursue the idea.

The story ends with the sculptor preparing to go out to “work on the roads” as a manual laborer ending hopes for continuing his art.

Link to the BBC IPlayer where one can stream this story temporarily.

Happy stuff for a musician like me first thing in the morning, heh.

I mention it because the music that the BBC used for the background of the dramatization seemed cribbed from the intro to the Beatles song, “And I Love Her,” and the main them of “Sunrise, Sunset.”

I found this mildly amusing especially considering the topic of the story.

My Mom seemed to be doing a bit better yesterday. She accepted my invitation to get out of the apartment. We dropped by the Farmer’s Market to see Eileen at the Master Gardener’s info table where she was volunteering. Then we picked up some Campbell’s potato soup and came to my house and had lunch together.

Yesterday after carefully preparing my Bach Pentecost organ pieces for today, for some reason I turned to Paul Hindemith’s organ sonatas.

I have performed all of the first one and some of the second. I have been thinking about Hindemith’s musical language. It is one that I have always liked. At this point in my life I really don’t personally know anyone else who likes Hindemith. He has fallen out of favor with most academics. Or at least the ones I talk to and read.

For me, he is someone I have listened to, played and read most of my adult life. His music is not all that easy to play but I think it sounds cool.

I came home and started reading an old article I had tucked away on his organ works. (“Hindemith and the Organ” by Boyd St. Jones II, AGO mag, March 1986).

Hindemith was one of the many talented people who fled from Europe to the USA during WWII. He continued to teach, write and composer. In addition to his compositions, he wrote much prose. I own quite a few of his works. He wrote a beginning theory text as well as an interesting set of exercises for musicians to hone their musical skills called “Elementary Training for Musicians.”

The title is ironic because the rhythm and sight-singing exercises in this book go from the simple to extremely complex. I have used these exercises as a student and as a teacher over the years.

He also wrote a couple volumes on his ideas about composing. 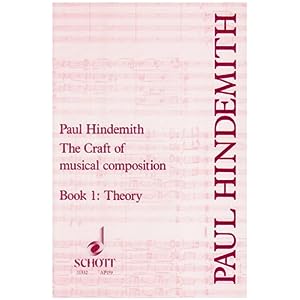 He believed that Western Musical scales are derived from natural acoustic properties. I don’t think he’s right about this, but I do find him charming, especially as a composer. 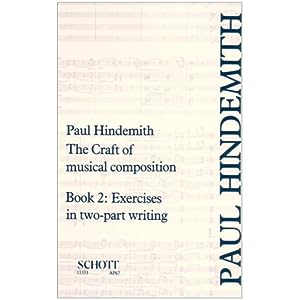 I played through a couple movements of his first piano sonata after I got home from practice yesterday.